Federico Chiesa clinched a Coppa Italia triumph for Juventus and a first trophy for coach Andrea Pirlo with a 2-1 victory over Atalanta in the final on Wednesday.

Another early Champions League exit and a limp Serie A title defence left Pirlo staring at a disappointing debut season as Juventus coach, but goals from Dejan Kulusevski and Chiesa earned his side Italian Cup glory.

With fans in attendance for the first time in Italy since March, it was Juve who took the lead at the Mapei Stadium, against the run of play, thanks to a fine finish from Kulusevski in the 31st minute.

Atalanta, looking to win their first Italian Cup since 1963, deservedly levelled through Ruslan Malinovskiy four minutes before the break.

But Pirlo's side stepped it up after the break and Chiesa fired home his 13th goal in all competitions this season in the 73rd minute to spark jubilant scenes among the Juve players and staff at the final whistle.

"It was wonderful for everyone," Chiesa told Rai Sport. "For those who have suffered in recent months.

"We players are protected but there are people out there who have suffered and are suffering. It is a reward for the efforts made in these difficult months." 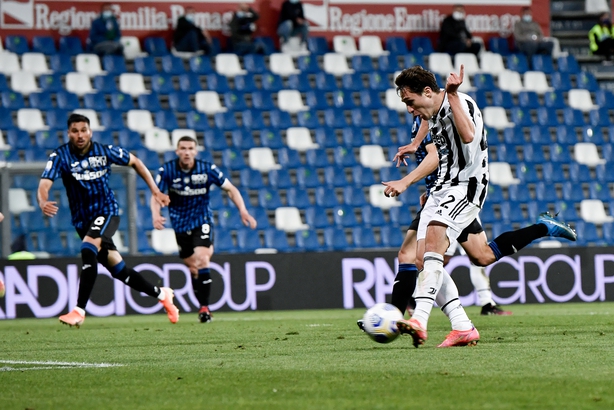 Atalanta's Duvan Zapata created the first real chance, using his strength to barge past Matthijs de Ligt before squaring the ball for Jose Luis Palomino, but the defender could not steer the chance home.

It remained all Atalanta, with Zapata's strength continuing to cause problems, but on their first real attack, Juve opened the scoring after Cristiano Ronaldo drove at the heart of the defence, and the ball fell loose for Kulusevski curled home.

Malinovskiy, who scored the winner in the last league meeting between the sides, continued his remarkable run of scoring or assisting in each of his last 10 appearances with a trademark powerful finish to level.

After the break, Atalanta's intensity dropped, with Juve having a great chance to take the lead, but Chiesa could only hit the post after latching on to a backheel from Ronaldo.

Chiesa was not to be denied, however, as he took his tally against Atalanta to five in all competitions - against no other Serie A side has he scored more - with a fine finish after a neat one-two with Kulusevski.

Atalanta threw bodies forward, but they could not test veteran Juve goalkeeper Gianluigi Buffon, playing potentially his last game for the club, as Pirlo's team clinched a 14th Coppa Italia - five more than any other side - with ease.

Kylian Mbappe set up the first goal and grabbed one of his own as Paris Saint-Germain retained the French Cup with a 2-0 victory over Monaco in the final at the Stade de France.

Quick thinking by Mbappe to disposes Axel Disasi in his own penalty area, as the Monaco defender let a short pass from goalkeeper Radoslaw Majecki slip under his feet, set up a 19th-minute opener for Mauro Icardi.

Mbappe took the ball away and, displaying quick feet, passed square for Icardi to tuck the ball home from close range.

With team-mate Neymar suspended and watching from the empty stands, Mbappe was able to dominate the contest with his talent and pace and added the second goal in the 81st minute.

Angel Di Maria set him up with a short through-ball and the World Cup winner lifted his finish over Majecki to make sure of the outcome.

Mbappe’s goal came a minute after he had hit the crossbar with a clever chip from outside the penalty area having spotted Majecki off his line.

It was one of few chances in a largely dour final, played behind closed doors, that only came alive in the last 15 minutes.

PSG retained their title and extended to 14 their record number of wins in the cup. Monaco had won five previous times but last in 1991 when Arsene Wenger was manager. They were last in the final in 2010 when PSG also beat them.

"We work every day to experience this type of emotion, reward and recognition. The work of a whole group, the staff, and the supporters who could not be here. We think about them a lot, this title is also for them," Mbappe said.

"When you play for PSG, one of the biggest clubs in the world, the biggest club in the country, every title counts to go down in history. We want to be part of this story, it's a great step today."

PSG defender Alessandro Florenzi had a powerful shot tipped over by Majecki in the first half while Monaco created the better opportunities after the break.

PSG goalkeeper Keylor Navas made two good saves from Wissam Ben Yedder and Krepin Diatta and saw an errant cross rebound back into play off his crossbar.

But any hopes of a comeback were swiftly ended by the pace and vision of Mbappe as he settled the outcome.

Both clubs now turn their attention to the end of the Ligue 1 season on Sunday where they hold out hopes of winning the title. PSG are second, one point behind leaders Lille, while Monaco are three points adrift.