Brighton staged a remarkable second-half comeback to stun 10-man Manchester City and record a Premier League victory on a raucous evening at the Amex Stadium.

An early header from Ilkay Gundogan and a superb individual effort from Phil Foden just after the restart put City in control before Albion came roaring back courtesy of Leandro Trossard and Adam Webster.

City, who succumbed to a first top-flight away defeat in 13 outings, were forced to play for 80 minutes a man down after Joao Cancelo was dismissed for denying Danny Welbeck a goal-scoring opportunity.

It came at a cost for both sides, with Welbeck and Gundogan each limping off injured, although that could not dampen the spirit of the euphoric home faithful at full-time.

Due to coronavirus restrictions and some unconvincing form last year, Brighton fans had not been present to witness their team win since December 2019.

The 7,945 fortunate enough to acquire tickets were in exuberant mood ahead of kick-off but were swiftly silenced only two minutes in as City captain Gundogan headed the visitors in front.

Quick feet from Riyad Mahrez – one of six players recalled by Guardiola – worked space on the right and his delightful cross to the back post was perfect for Gundogan to calmly nod his 13th Premier League goal of the season beyond Seagulls goalkeeper Robert Sanchez.

The mood did not dampen the enthusiasm for too long and there was soon reason for greater optimism as City were reduced to 10 men just 10 minutes in.

Cancelo misjudged a long ball forward and, in his desperation to atone, brought down Welbeck as the Seagulls forward raced towards goal.

VAR had a look at the incident – which prompted some colourful chanting on the terraces – before agreeing with the decision of referee Stuart Attwell to dismiss Cancelo for denying a goalscoring opportunity. 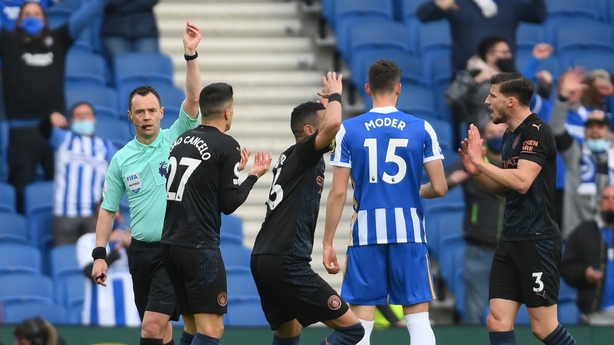 Pascal Gross was unable to capitalise on the resultant free-kick, while Guardiola sacrificed the unfortunate Ferran Torres – who scored a hat-trick at Newcastle on Friday – in favour of Eric Garcia.

Albion owner Tony Bloom declared in his programme notes that the club were playing the best football in their history under head coach Potter.

With a man advantage, the Seagulls were ideally placed to show off their slick passing game against arguably the masters of the art.

Yet they still had to be careful at the other end, as evidenced by Ben White’s last-ditch tackle preventing Foden doubling the advantage.

Brighton’s chances to level before the break were relatively scant. Stand-in skipper Gross made a mess of good work from Jakub Moder when well-placed inside the box, before their attacking threat was reduced by Welbeck limping off with an apparent thigh injury.

The former England forward, whose Albion contract expires in the summer, had registered four times in his last eight outings and there were chants of 'sign him up’ as he headed straight down the tunnel to be replaced by Trossard.

Just like they had done in the first half, City made a rapid start to the second, shrugging off their numerical disadvantage to go further ahead in the 48th minute courtesy of Foden’s magic.

There appeared to be little danger when the England man, who had been operating as a lone forward following the early enforced reshuffle, collected the ball wide on the left around 15 yards inside his own half.

But, after accelerating away from White on the halfway line, he burst into the penalty box on the left-hand side before confidently finding the bottom-right corner as Webster attempted to close him down and then cupped his left ear to the stunned home supporters.

Seagulls substitute Trossard swiftly made a game of it just two minutes later, capitalising on a sloppy pass from Rodri by charging into City’s area and eventually unleashing the ball high into the net after a series of feints bamboozled the visitors’ backline and temporarily frustrated the crowd.

City were clearly uneasy about their slender advantage, resorting to time-wasting at goal kicks.

The disruptive tactics prompted match official Attwell to speak to Fernandinho, who came on to take the armband when Gundogan followed Welbeck in exiting injured, and Albion soon showed why they were necessary.

Guardiola could have been forgiven for thinking his side were playing in a sold-out stadium when Webster rose majestically to thump a header into the bottom-left corner from Gross’ pinpoint cross with 18 minutes to go, prompting scenes of unbridled jubilation in the stands.

Marauding centre-back Burn found himself in unfamiliar surroundings in City’s box and, after Ederson repelled his initial effort, he promptly swept in the rebound to complete a stunning turnaround that those present will never forget.

City still had time to prevent defeat and would have done so had Sanchez not brilliantly pushed away an effort from substitute Gabriel Jesus.