Ronald Koeman admitted it will be "very difficult" for Barcelona to win LaLiga after they twice squandered the lead to draw with Levante.

Barca were pegged back from 2-0 at half-time to 2-2 and after Ousmane Dembele gave them the lead once again, substitute Sergio Leon grabbed a point for the hosts.

The result leaves Koeman's side a point behind leaders Atletico Madrid and a point ahead of Real Madrid, who have three games left to Barca’s two. Atletico and Real play on Wednesday and Thursday respectively.

The Dutchman said at a post-match press conference reported by Marca: "The league is more complicated now. The objective was to win all three games, but now it is very difficult."

Asked about his future at the club, Koeman added: "As a coach you are the most responsible.

"We are very disappointed with the result." 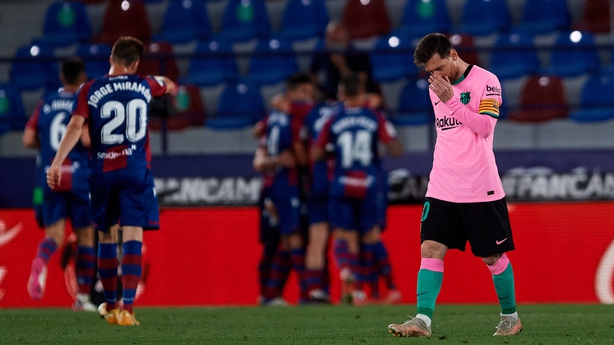 Lionel Messi’s superb volley was added to by Pedri, only for Gonzalo Melero and Jose Morales to draw Levante level before Dembele and Leon traded goals.

Koeman said: "We were good in the first half but in the second half we lost a lot of dangerous balls, we lowered the intensity. We made a lot of mistakes in defence. We were not attentive.

"The games last 90 minutes and we lost a lot in the second half. It is very disappointing. It is difficult to explain what has happened.

Levante coach Paco Lopez said: "The feelings weren’t bad despite the 0-2 (half-time score). We made the players see it and we had to have faith. We were effective in the second half.

"Sergio had had many minutes in which he was not successful, but today he has given us a point."

Goalscorer Leon added: "Satisfied for the draw, the comeback and for my goal, which I also needed.

"The second half went very well and we were able to overcome a great team. Scoring against these teams gives you a bonus to face the two remaining games with the best possible attitude."