Waterford FC should consider pulling out of this weekend's match with Sligo Rovers in the SSE Airtricity League, according to RTÉ Soccer analyst Karl Sheppard.

Last week the Blues had to use academy players under the age of 18 due to Covid-19 protocols.

All of the Waterford FC senior side were stood down for the game with Drogheda United.

This season new rules have been brought in by the FAI which mean teams can not seek postponements and instead must either player their academy team or else not fulfill the fixture, which would hand the opposition the three points on a nominal scoreline.

Drogheda claimed a 7-0 victory over the young Waterford side last Saturday.

With players under the age of 18 unavailable to play, it meant that even their Under-19 team were depleted.

As it stands, the Blues senior squad will not be able to feature against third place Sligo in a game scheduled for Saturday evening in the Showgrounds. 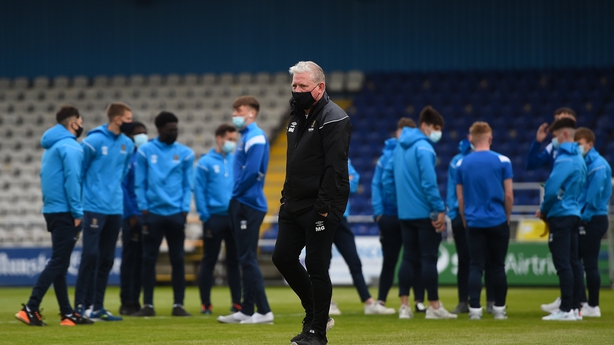 Interim manager Mike Geoghegan said after the game in relation to playing the academy team in Sligo: "It looks like it is very, very likely to happen with the protocols. It is something we need to go back and consider. Sligo are a top side. The players here have one game under their belts at least."

The relaxing of Covid-19 protocols in sport from yesterday means that the Under-19 players who missed out against Drogheda United can feature this weekend, so five new players can be part of the squad, including the first choice centre-half pairing for the Under-19 side.

However, it is still going to be a difficult ask in an even more daunting game away from home against Liam Buckley's men.

Sheppard, speaking on the RTE Soccer Podcast, said that using the academy players who had no preparation or had played a game in months, is out of order and feels repeating it this weekend could damage the players.

"It's borderline disgraceful really when you look at it. If you had your first pre-season game, you would not throw in players and expect them to complete 90 minutes.

"That is especially if it is against a calibre of side where you are going to be chasing the ball around for 90 minutes.

"If a similar team has to go up and play this match in Sligo, it is screaming out for injuries.

"If one or two of those lads pick up injuries, questions will have to be asked about how this game could go ahead."

Waterford did make substitutes throughout the game as their young players tired, and will have more available this weekend.

However greater thought must go into fielding such a team, feels Sheppard.

He added: "Kevin Sheedy had a policy before he left of not putting the academy players on the bench. You would understand now if the club pulled the team away for this game because they would not want those players to play another 90 minutes if it means they could get injuries.

"At their age, for the confidence and mentality coming away from these games, if they took another seven to nine goal beating off Sligo, which is very well possible because Sligo are going really well, their confidence will be on the floor for God knows how long."

Further clarity on which players Waterford FC have available is expected later this week after discussions with the FAI and the HSE.