Manchester United owner and co-chairman Joel Glazer has told supporters he is willing to discuss increasing fan shareholding in the club as part of greater consultation with them.

Violent protests against United's American owners, who were central to plans for a breakaway Super League, led to Sunday's Premier League match at home to Liverpool being postponed.

The Manchester United Supporters Trust (MUST) had written to Glazer on Monday urging him to take several steps including opening up shares to fans.

Responding in an open letter to Fans' Forum members, Glazer said: "As one of the few European football clubs listed on the public markets, we believe in the principle of fans owning shares in the club.

"We have previously engaged with the Manchester United Supporters' Trust on fan share ownership and we want to continue and accelerate those discussions, together with provisions to enhance associated fan consultation".

Glazer said the club was committed to listening to the views of fans.

"We want to work together to come up with an ambitious package of measures which will transform our relationship with fans and strengthen the club for the long-term. 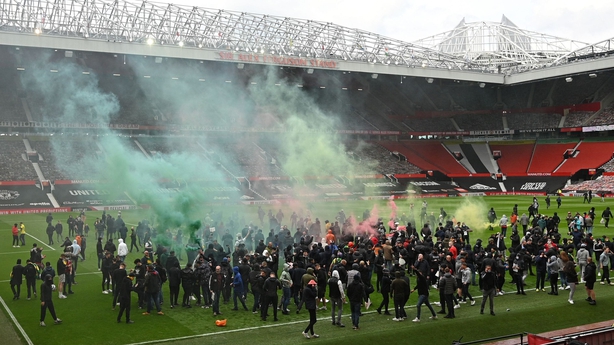 "In this spirit, we will reach out to members of the forum to schedule a meeting in which I shall participate as soon as possible after the final game of the season," he wrote.

"One of the clearest lessons of the past few weeks is the need for us to become better listeners. To this end, I can commit the club will engage across all of the issues raised in your letter".

But in reply to Glazer, MUST said it would have to consult more widely before entering any discussions with the club.

"The (Glazer) response could in theory - and we emphasise in theory only - be a change in direction and approach by the owners versus their silence and disregard for communication over the last 16 years," MUST said in statement.

"We will, however, determine our position based on the resulting actions rather than these words alone. We have seen empty words too many times previously.

"We will seek a mandate from our members and from the wider fanbase before proceeding. We only wish to engage in this process should our supporters want us to," it added.

The Super League affair has relit the always smouldering protest movement amongst United fans with a supporter demonstration at the club's training ground followed by Sunday's protests which involved clashes with police.

Glazer has apologised for United's involvement in the Super League project, which would have seen 12 of the top clubs in Europe breakaway from the established structures to create a privately owned championship.