Back-to-back wins had given Dundalk hope that they were on the way to closing the gap on Shamrock Rovers at the top of the table.

The Lilywhites saw off Drogheda United and Waterford and were hotly tipped to see off Longford Town last Monday.

Once again, goalkeeping proved a weak spot as two Peter Cherrie errors gave the home side a lead that could not be overcome.

With one quarter of the season played, Dundalk are 13 points off the leaders. This league season could soon be focused on qualifying for Europe rather than a league challenge and this game is an important one with that in mind.

Sligo Rovers can be pleased with their opening to 2021. It is their best start to a campaign since 2013, although a defeat to Derry City and disappointing 1-1 draws for various reason has set them back somewhat.

The gap between the sides is six points going into this game as Sligo sit in third place so the result could close that margin or stretch it even further.

Dundalk: Sam Stanton, Brian Gartland, David McMillan, Sonni Nattestad and Patrick Hoban are out while Han Jeong-woo is a doubt.

Sligo Rovers: Danny Kane misses out while Mark Byrne will have a late fitness test.

Jim Magilton (Dundalk interim manager): "Sligo are a well-balanced team. They've got a real threat, they’ve got good footballers who know the league, they’re very experienced, they’ve got pace and they’re going to be a threat.

"It’s as simple as that but we are relishing the opportunity to play them and hopefully, we’ll present ourselves.

"You’ve seen the success this club has had, a lot of the players are still here, and now it’s a different challenge for them. The bottom line is, they have to win this game and they’re aware of that. End of story. I don’t care how they win it, they just need to win it!"

Liam Buckley (Sligo Rovers): "I do think Dundalk will be an even more difficult proposition compared to our first meeting. Like us, they had bedding in period for a lot of new players early on in the season.

"They've also gone through a managerial change and what comes with it. They will be a lot stronger, they’re picking up wins and we have to be ready for them.

"That said, it’s a game we’re looking forward to. We’re determined to build on the work we’ve put in so far this year and it’s another chance for us to do so and show what we can do.

"The games between the teams are always close and it’s going to be the same on Friday I feel." 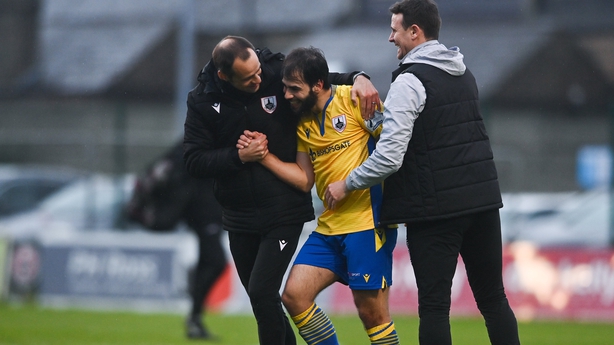 Ruaidhri Higgins made a flying start to management with Derry City but was quickly brought back down to earth on Monday after Finn Harps came from behind to record their first ever win at the Brandywell.

The result keeps Derry in a congested bottom half of the table, where, after the tribulations of the early season, all sides sit within four points of each other.

Under-performing Dundalk and Bohemians are among the teams in that region and are expected to soon climb away, but it reiterates an opinion stated by many managers this season that it is a hugely competitive division.

Town are win-less since their opening night success over Derry. The battling qualities and supreme organisation which brought Longford up was on show again last Monday as they recorded a morale-boosting draw with the Jim Magiltion's side.

Derry City: Ciaran Coll returns after missing the last few games with injury. Darren Cole could be available, while Marc Walsh will be assessed late on.

Longford Town: Aaron McNally and Callum Warfield will miss the trip to Derry, and while Daire Doyle has some injury concerns, the squad have been boosted by recent returns, including Dean Zambra and Dean Byrne.

Ruaidhri Higgins (Derry City manager): "It's always disappointing to lose, especially in the circumstances, but the players are ready to go again.

"There are three points on offer again on Friday night and we want to go and win them. It will be far from easy, we already know that, but if we can do that it lifts the whole place."

"Picking up nine points out of 12 would be a great start and that has to be the target."

Daire Doyle (Longford Town manager): "Obviously Ruaidhri (Higgins) has come in and they've had a good couple of good results. You are going to get that little bounce from a squad," said Doyle, speaking to the Longford Leader.

"We say to the lads every single week, we are here in this Premier Division and we need to prove a point because if we don’t we won’t continue to be here.

"What we do have is a group that believe in what we want. We belong in the top flight. We believe we can put in the performances and get the results to achieve that aim."