Ian Bermingham struck in the fifth minute of added time as St Patrick's Athletic maintained their unbeaten start to the season with a late, late draw against Sligo Rovers at the Showgrounds.

Both managers made three changes from their respective previous outings, with Niall Morahan and Colm Horgan returning for Sligo, while teen Mark Byrne was handed his first start for the Yeats men.

Pat’s boss Stephen O’Donnell was afforded the opportunity to welcome experience back into his starting side. Former Rovers striker Ronan Coughlan along with John Mountney and Ian Bermingham returning having not started in their victory over Longford.

The hosts hadn’t beaten their opponents since June 2018 and were fortunate not to be trailing early on.

Sligo’s Greg Bolger flashed an effort across goal after great work from ex-Pat’s winger Gibson in the opening moments.

Minutes later, Bermingham passed up an excellent opportunity when unmarked, he could only head straight at Rovers goalkeeper Ed McGinty.

St Pat's get out of Sligo with a point - but only thanks to a late, late leveller... #RTEsoccer pic.twitter.com/XMyZPuPO1S

The in-form Chris Forrester spinning his magic as he played a well weighted ball into the path of Coughlan was first denied by a sprawling McGinty, before a combination of the young Scot and Sligo defender John Mahon crowded Coughlan out. The Limerick native denied a second bite at the cherry thanks in part, to Mahon’s strength.

Top scorer in his previous season with Sligo in 2019, Romeo Parkes lacked the killer touch required to trap Greg Bolger’s through ball. Knowing a sharper reaction would have resulted in a one-on-one with Vitezslav Jaros, the Jamaican could only look on in agony as the Saints defence recovered in time to bring the ball away.

The Inchicore side were inches away from the lead on the half hour. But it was Paddy Barrett’s turn to grimace as his header from a Forrester free bounced on to the top of the Sligo crossbar.

There was another late Sligo chance late in the half, but Gibson fired over from the angle when the hovering Parkes looked a better option in front of the target. 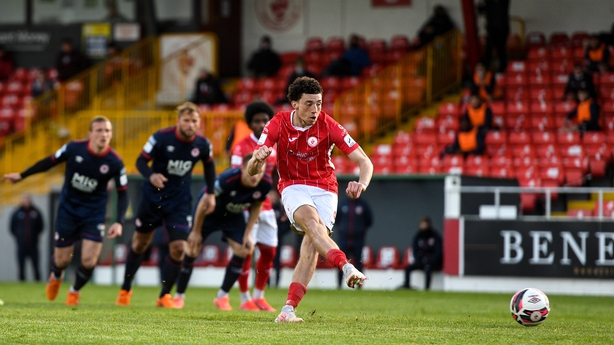 Gibson however, was spot-on from 12 yards four minutes into the second half. The once Glasgow Rangers youth converting the penalty he himself won, after he was barged to the ground inside the area by an over-physical Barrett.

Pat’s reacted to this set-back by switching to a more attacking formation. Lee Desmond headed straight at McGinty, while Coughlan spun an effort wide of the far post after he muscled his way past Garry Buckley at the end line close to the hour.

Desmond again went close from a Forrester set piece, but could only nod wide a group of Pat’s players rushed to the front post.

While a back-peddling McGinty had to scramble to ensure Coughlan’s header on the spin was cleared to safety moments later.

Walter Figueira slipping the ball into the path of substitute Johnny Kenny who wrapped the ball around Jaros, but also past the far post as his placed effort dragged narrowly wide.

Referee Neil Doyle added four minutes on at the end of this encounter, but allowed Pat’s an extra 60 seconds from which they grabbed their dramatic leveller.