Liam Burt's second goal of the season looked to have handed Bohemians a third win of the season but Clarke’s intervention, turning in after Bohs failed to clear Brandon Bermingham’s corner saw the spoils shared.

Bohs, had they held on, would have been full value for their win against a United side who now haven’t won in five outings but will be boosted by the late leveller, which was hardly deserved in truth.

David Odumosu, the 20-year-old goalkeeper, was restored to the Drogheda team after Colin McCabe's mistake handed Sligo Rovers an equaliser last Friday. Odumosu had started the season as the first choice but after picking up a knock prior to the win at Longford had spent the last five games in reserve.

He was forced into action early on when Anto Breslin tested his reflexes with a low drive. The goalkeeper was up to the task and made the save. Devon Devoy had sent a rising shot over the bar inside the opening 60 seconds.

Bohs were unbeaten on Boyneside the last time Drogheda were a Premier Division side. They won on both trips to Drogheda in 2017, including a 4-1 win that featured a hat-trick from Keith Ward and one from Dinny Corcoran.

Drogheda had little to show for their first half endeavours. Chris Lyons shot low at goal from the edge of the area but it rolled harmlessly wide. It was no more than a half chance.

The returning James Finnerty headed wide from a corner and the Bohs bench called for a penalty when Odumosu collided with Ross Tierney in the area. Referee John McLaughlin was unmoved.

He was all the more willing to brandish his cards in the opening 45 minutes. Tierney, George Kelly, Gary Deegan and Mark Doyle all entered the book.

The sides exchanged opportunities at the beginning of the second period. After excellent work by teenager Killian Phillips, starting in midfield after being pressed into a three-man defence against Derry, shrugged off two challenges in midfield. After his run was stopped, Luke Heeney’s shot was goalbound but blocked by Finnerty.

At the other end, Daniel O’Reilly did likewise to deny Kelly. 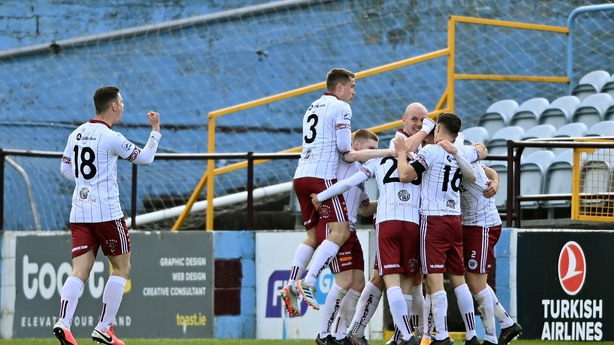 The opening goal - the game’s only true moment of quality, executed to perfection - arrived on the hour mark. The impressive Devoy played a quick ball over the top of the Drogheda defence. Burt read it perfectly and with Odumosu advancing off his line, he produced a deft finish into the far corner.

Clarke’s equaliser, just the 20-year-old’s second senior goal, came as the corner hit Devoy and bounced kindly into the path of Clarke, who headed in off the post.

The draw means United have now won just one of their last eight encounters with the side from Phibsborough. Boss Tim Clancy has decried his team’s misfortunate of late, saying recent results were not reflective of on-field performances.

They offered little going forward in 90 minutes on home soil and a late point is more than they deserved.