Pep Guardiola warned the job was far from done after goals from Kevin De Bruyne and Riyad Mahrez earned Manchester City a 2-1 win in the first leg of their semi-final at the Parc des Princes.

Guardiola expects PSG, who started brightly with an early Marquinhos goal but lost shape and had Idrissa Gana Gueye sent off late on, to come roaring back at the Etihad Stadium next week.

He said: "It is a team that is able to do whatever they want because they have the quality to do it.

"This club wins the French league every year, they were in the final of the Champions League last year. They know exactly what they have to do to handle these types of games.

"It's just the first 90 minutes and there is hard work to do."

Guardiola felt his team's character showed through as they produced a mature response to PSG's first-half dominance.

City created little in the opening period, with their best opportunities coming from their opponents' mistakes.

It was from a Di Maria corner Marquinhos headed the opener after 15 minutes but City dug in to prevent further damage and were more like their usual confident selves in the second period.

"In general we were shy," said Guardiola of the first-half display. "We could not express what our responsibility is. Everyone played safe and did not have the personality to go through and play.

"The second half was much better. We regained the ball quick. We were more aggressive without the ball and, with it, passionate. We found the goals and wanted to score more.

"The question is simple: If we play shy and not who we are everything can happen and PSG have the quality to turn it on.

"But if we play the way we played the second half, who we are, maybe we will have the chance to reach the final." 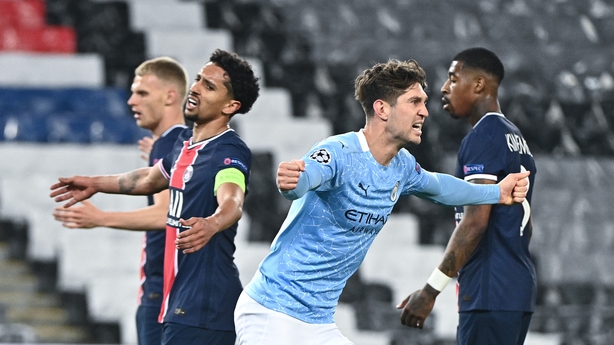 De Bruyne had already narrowly missed with an overhead kick when he equalised on 64 minutes. Mahrez found a hole in the PSG wall to add a second from a free-kick soon after.

PSG began to look ragged and Gueye was shown a straight red card for a poor tackle on Ilkay Gundogan.
Manager Mauricio Pochettino promised to go for broke in an attempt to turn the tie around.

He said: "We go there in six days and will try to win and score goals. Of course we are under a little bit of pressure but in football you need to try."