Tottenham took the first steps of moving on from their European Super League shame as they began life after Jose Mourinho with a late 2-1 Premier League win over Southampton.

It has been a tumultuous 72 hours for Spurs as since they last played at Everton on Friday night they joined the ESL, sacked Mourinho, appointed 29-year-old Ryan Mason as interim head coach and then, after much derision, buckled under the weight of extreme resistance to the breakaway plans and quit.

After fans protested before the game against chairman Daniel Levy and owners ENIC, things did not look like they were going to get better in the wake of Mourinho's exit as Danny Ings gave Southampton a first-half lead.

But Gareth Bale, back in the side after being frozen out under Mourinho, levelled and then minutes after VAR had ruled out a Son Heung-min goal, the decision-review system awarded Spurs a penalty at the death, which Son struck home.

It was just the tonic the beleaguered club needed going into Sunday’s Carabao Cup final and they move back into the top six, just two points off the top four.

It was also a fairy-tale evening for Mason, who joined Spurs as an eight-year-old and was cruelly forced to retire as a player aged just 26, beginning what could be a seven-game reign with a win.

Southampton, who lost in the FA Cup semi-final at the weekend, have not enjoyed life in the Premier League in 2021 and are still not out of relegation danger, sitting just six points above the drop zone.

The stadium announcer began his pre-match address by saying "it has been an intriguing few days" and that does not quite do it justice.

Fans were not going to let Spurs forget their part in the much derided breakaway plans and a number of them gathered outside the ground to protest.

Events off the pitch had provided distraction from just how dismal it has been for Spurs on it recently, but once the action got under way it was soon back front and centre of everyone’s minds. 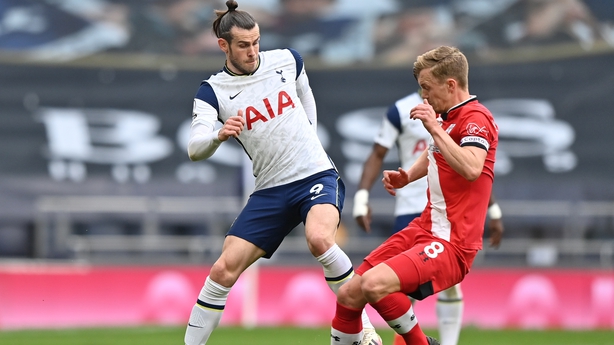 Southampton arrived with just three Premier League wins this year but should have gone ahead inside the first five minutes as goalkeeper Hugo Lloris produced a fine double save.

First he did brilliantly to palm away Mohammed Salisu’s header and then recovered superbly to keep out Che Adams’ follow-up with his legs.

Mourinho may no longer be in the building but the same defensive problems exist and Saints took a deserved lead after 30 minutes.

Ings got in front of Serge Aurier from a corner and sent a glancing header in off a post for his 12th goal of the season.

Mason had vowed to send his side out to be brave and aggressive, but, robbed of star man Harry Kane, it was a lifeless performance in the opening 45 minutes.

However, they should have gone in level at half-time as Lucas Moura missed a great chance as he blazed over at the far post.

It did not take much, but there was a big improvement after the break and Bale was at the forefront of it.

A lovely flick teed-up Son, whose shot was blocked, and then a trademark swerving effort from distance tested the handling of Saints goalkeeper Alex McCarthy.

The deserved equaliser came on the hour and it was a moment of class from Bale.

Tottenham’s best move of the game saw Tanguy Ndombele, Son and Moura combine, with the latter’s blocked shot falling to the Welshman at the far post and he sent a delicious curling effort in off the far post.

Spurs thought they had scored the winner 16 minutes from time with what looked like a lovely goal.

Giovani Lo Celso played in Sergio Reguilon, whose pull-back to Son was arrowed into the bottom corner. However, VAR spotted Moura in an offside position in McCarthy’s line of sight, even though the goalkeeper had no chance of saving it.

But VAR paid them back in the 89th minute as, after a free-kick was initially awarded by referee David Coote for a foul by Moussa Djenepo, replays showed it took place on the line of the 18-yard box and was ruled as a penalty.