Danny Mandriou was the late, late hero for Shamrock Rovers as his 95th-minute goal beat Drogheda United to ensure the champions remained at the top of the SSE Airtricity League.

It looked as if Rovers would relinquish top spot until Mandriou's last-gasp intervention. He headed in Dylan Watts' free kick at the back post to break United hearts after they withstood considerable pressure in the late stages of the game.

The impressive home side - who pressed with intent and aggression throughout - switched off at the very last moment, leaving substitute Mandriou to head in.

Another sub Graham Burke had gone the closest before the winner, but his shot was well saved by Drogheda stopper Colin McCabe. Rovers ability to conjure important late goals this term hadn't deserted them in the end.

United were missing Conor Kane, Jake Hyland and experienced striker Dinny Corcoran so 19-year-old Killian Philips was named in midfield to make his league debut for Drogheda against exalted company. McCabe continued in goal for the third straight game while Hugh Douglas was passed fit.

Stephen Bradley made four changes from the side that beat Longford Town on Saturday with Dylan Watts, Rory Gaffney, Gary O'Neil and the returning Sean Hoare named in the starting XI. Burke was left on the bench, despite two goals in as many games - including his wondergoal at the Brandywell seven days ago. 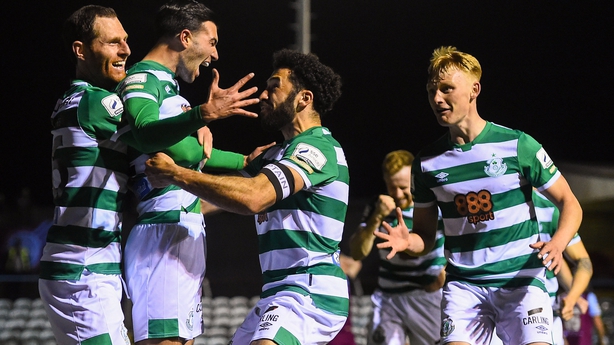 Bereft of chances in the opening 20 minutes, the first goal could have arrived via an error in the home defence. After McCabe unadvisedly left his goal and failed to collect a cross, Gaffney pounced on the loose ball but he snatched at the opportunity. It was on target but Daniel O'Reilly was well placed on the line to clear.

Aaron Greene then forced his way, via at least one fortunate ricochet, to the byline but when he centred for Sean Gannon, Ryan O'Shea was there to divert the ball out for a corner.

The closest Drogheda came in the first 45 minutes was via two Luke Heeney crosses. First Phillips and then O'Reilly, from a free kick, just failed to connect when free in the area. Heeney himself then stung the palms of Alan Mannus prior to half time.

Bradley bemoaned the first half performance against Longford on Saturday as their worst display in 12 months. He will have been satisfied his changes prompted an improvement but the United goal was at no point under siege.

Early in the second half, in-form James Brown met another Heeney delivery in the box but he sent his header high over the bar. That half-chance aside, the second half followed a similar pattern to the first. There was endeavour aplenty but opportunities of note were a rarity.

Rovers introduced Chris McCann, Burke and Mandriou to try and wrest the game from their hosts. Heeney was booked for a late challenge on Sean Kavanagh which had Rovers players' demanding he see red. Pico Lopes and Mark Doyle were carded for their part in the ensuing melee.

As the clock ticked towards the end of the game, United would have been wary and Rovers confident. The Hoops had gained four of their 11 points this season with goals in the 88th minute or later.

Burke forced McCabe into the first real save of the evening inside the final ten minutes. His snapshot went through Brown's legs but the goalkeeper stretched out his right leg to prevent the opener.

In the fourth minute of injury time, Dylan Watts weaved his way through a number of challenges and shot from the edge of the box. McCabe spilled it but Jack Tuite beat Burke to the loose ball.

That didn't preserve the result for Drogheda, however. Referee Damien MacGraith added a further two minutes to four minutes of injury time after Ryan O'Shea was injured. That was enough time for Mandriou to find the net and Rovers the win. 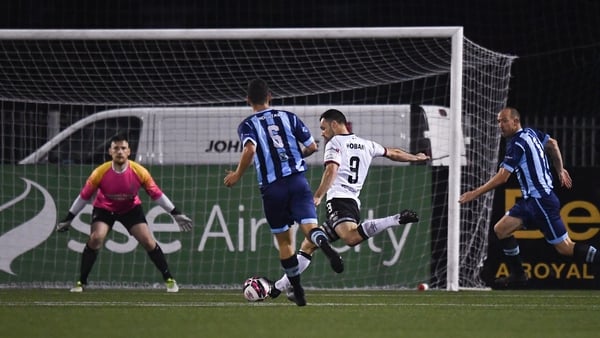 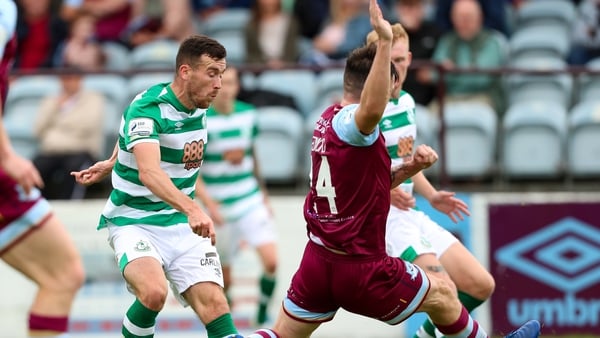 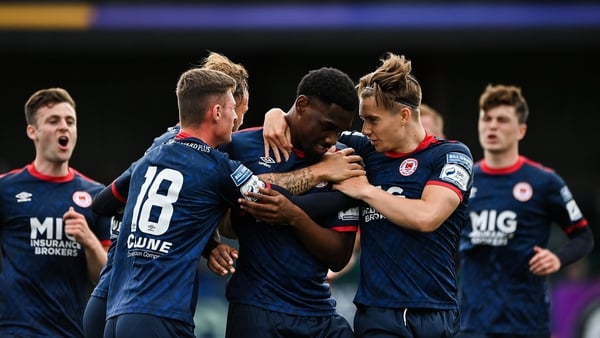