Tottenham boss Jose Mourinho did not want to get involved in the controversy surrounding his club's new sponsor Dulux in case it was a PR stunt.

Spurs' partnership with the paint suppliers got off to a rocky start after they were mocked by Dulux's official account on Twitter.

Responding to replies on Tottenham's tweet announcing the deal, Dulux's social media team made fun of the club's lack of recent silverware, posting a picture of an empty trophy cabinet being for sale and then made a barb about the club's defenders.

In a reply to a tweet asking whether the famous Dulux dog can play centre-back, they tweeted: "He might do a better job".

While it might have made it a difficult start to their relationship, the inappropriate tweets did at least get people talking about Dulux, which was the second top trend on Twitter for large parts of Thursday.

The paint company later apologised for the tweets and said they were proud to be associated with Spurs.

Mourinho was pressed on the matter at his press conference to preview Friday's trip to Everton, but decided the best course of action would be to steer clear of it. 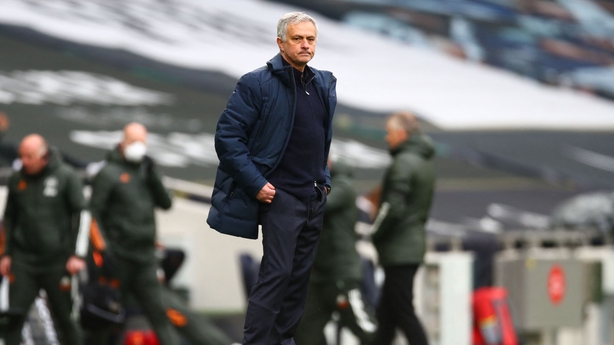 The Portuguese said: "I don't know what you are speaking about but maybe it is an amazing strategy move.

"Maybe if I am going to criticise something and then I realise it was a strategic commercial or situation, then I would be in a bad position.

Football-related matters are causing Mourinho most disquiet at the moment as his side are six points off the top four going into Friday's game at Everton.

Defeat would surely end any hopes of Champions League qualification and could also raise doubts about a Europa League spot.

That could leave the newly created UEFA Conference League as their only route into Europe next season by winning next weekend's Carabao Cup final against Manchester City - not that the third-tier tournament formed to give teams in European backwaters more European football is enticing.

Nevertheless, Mourinho insists he would treat the competition with respect, should Spurs end up there.

"Every competition we try to win every match and of course we don't. We never thought we were going to do that. But since the beginning of the season, this season, we try to treat every competition the same way.

"So I think it is this you have to respect every competition you are involved in."