Slavia Prague defender Ondrej Kudela has been banned for 10 matches by UEFA after being found guilty of racist behaviour towards Rangers player Glen Kamara.

The Finn was incensed after Kudela whispered into his ear during a Europa League tie at Ibrox on 18 March.

Kudela had been handed a provisional one-match ban over a lesser charge of insulting Kamara, and that ban is included within the overall 10-match sanction.

Kamara has also been banned for three matches after being found guilty of assaulting Kudela in the tunnel after the game.

The body’s full written reasons will be published at a later stage, and both sanctions are open to appeal.

As it stands, Kudela will miss the remainder of Slavia’s Europa League campaign – they play the second leg of their quarter-final tie against Arsenal on Thursday night – plus at least five matches at Euro 2020, including the Czech Republic’s group games against Scotland and England.

Kamara’s ban only covers UEFA club competitions, meaning he will be eligible to represent Finland at the Euros.

Kamara's lawyer, Aamer Anwar, said the 10-game ban for Kudela – which is the minimum sanction for a racist offence – "made a mockery" of UEFA’s claims to take racism seriously, while Show Racism the Red Card tweeted: "UEFA handing Ondrej Kudela a 10-match ban after he whispered racist abuse into the ear of Glen Kamara is wildly insufficient. Players can wear 'respect’ on their arms, but without zero tolerance of racist abuse, it stands as an empty gesture."

The Czech champions issued an apology to Kamara. Slavia chairman Jaroslav Tvrdik said: "Ondrej was suspended for 10 UEFA games and as a club we respect the decision. In any case, Ondrej Kudela should not have approached the opposition player. I deeply regret that and apologise to Glen Kamara for a situation that has clearly caused distress to him and his team-mates, as well as everyone associated with Slavia and Rangers.

"I am taking positive steps to prevent such a situation from happening in our club ever again."

Kamara said last week he had been racially abused on social media "every day" since the Kudela incident. His team-mates have boycotted the platforms for a week in support.

Police Scotland's separate investigation into Kudela's actions and events in the tunnel after the match is ongoing, the force have confirmed.

Kudela had covered his mouth before talking to Kamara, something former Holland international Clarence Seedorf said earlier on Wednesday should be sanctioned. 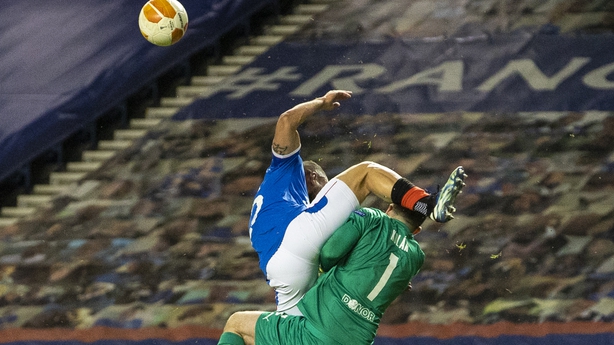 Rangers' Kemar Roofe, who was also subjected to racial abuse on social media after being shown a red card for a high-boot challenge on Slavia goalkeeper Ondrej Kolar (pictured above), was banned for four games.

Rangers, who were knocked out of the Europa League following a 3-1 aggregate loss after having two players sent off, were fined €9,000 for improper conduct.