Northern Ireland's players were left pinching themselves after they secured their first trip to a major finals with a 2-0 Women’s Euro 2022 qualifying play-off victory over Ukraine on Tuesday night.

Goals from captain Marissa Callaghan and substitute Nadene Caldwell finished off the job as Northern Ireland secured a 4-1 aggregate victory and a place in the history books against the odds.

"It’s unbelievable," Callaghan said. "Do you know what? I actually can’t believe it. We have eight players out injured who started this campaign, we’ve had to bring more players into the squad but they’ve stepped up."

The achievement comes just 17 years after the team was reformed in 2004, demonstrating their rapid rise in recent years.

"This was always the dream, ever since I was a little kid," Simone Magill said. "Not only did I want to play for Northern Ireland, I wanted to be part of the first group to go to a major tournament and here we are.

A big part of the credit will go to manager Kenny Shiels and the backroom staff, which includes his son Dean. Since they took over 20 months ago, the team has battled that growing injury list and a calendar ripped apart by the pandemic. 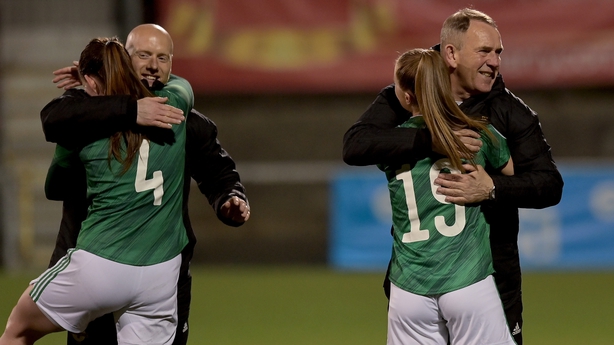 Bar a friendly against England in February, many members of the squad had not kicked a ball in anger since December as leagues were suspended, but none of that seemed to matter as they outperformed Ukraine over two legs.

Northern Ireland continue to lag behind in the world rankings – at 49th they are 25 places behind the next lowest nation, Russia, that has qualified for next summer’s tournament – but those numbers have some considerable catching up to do.

"Before we didn’t win games, and then Kenny Shiels and his son and the backroom staff came in," Callaghan said.

"All they’ve done is believe in us and now we believe in ourselves and look what’s happened."

With restrictions hopefully easing and players due to come back from injury, Shiels and his players will hope there is only more to come as they look to next summer’s tournament in England.

"This is just the beginning," Magill added. "The journey since Kenny’s come in, everybody has seen the growth. We’ve got a year now to prepare. The journey we’ve been on has been fantastic and the progress we’ve made, so who knows where we’ll be at in a year’s time. I can’t wait."