Pep Guardiola insists he did not prioritise the Champions League ahead of Manchester City's surprise loss to 10-man Leeds.

The Premier League leaders came unstuck for only the second time in 29 games in all competitions on Saturday as they were beaten 2-1 after Guardiola made seven changes to the side.

With a comfortable lead at the top of the table and Wednesday's quarter-final second leg against Borussia Dortmund to plan for amid a continuing quadruple bid, Guardiola could perhaps be forgiven for focusing his attention elsewhere.

The City manager maintains, however, that is not how he works and has strongly defended his selection, pointing out he has made regular changes throughout his side's strong run.

Guardiola said: "Listen, I made changes but maybe I will play the same team in Dortmund.

"I've said many times they play because I want to let them play, not because I reserve these players.

"I demand [of] every team I send out that they win. I don't select competitions.

"I select every team to win a specific game. If not, it would not be possible to arrive in the position that we we are in the Premier League and the other competitions." 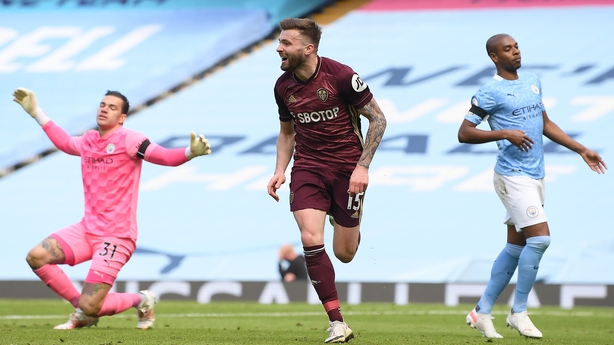 Kevin De Bruyne, Riyad Mahrez, Phil Foden, Ruben Dias and Ilkay Gundogan - some of Guardiola's key performers of late - were all on the bench against Leeds.

Yet the side selected still dominated, racking up 29 shots as Leeds played more than half the game with 10 men after Liam Cooper was sent off. They were caught out in stoppage time as Stuart Dallas grabbed his second goal of the game on a rare Leeds attack.

Guardiola said: "I decided on the selection and, with 29 games and 27 won, the rotation was exceptional, wasn't it? Now it [seems to be] a problem as [people] ask.

"But I don't know. If you can tell me that if the others played, and assure me 100% that we'd have won, then you would be a perfect manager.

"I don't know if I'd made another selection what would have happened."