Defender Trent Alexander-Arnold found himself in the spotlight for the third time in a week as his added-time winner against Aston Villa kept Liverpool's Champions League qualification hopes alive.

The England defender, watched by national team boss Gareth Southgate who left him out of his squad for the recent World Cup qualifiers, rifled home a shot to snatch a 2-1 Premier League victory and end the Reds’ worst home league run in their history.

After six-successive defeats, Jurgen Klopp’s side registered their first home league win in four months as they recovered from going behind to Ollie Watkins’ opener with Mohamed Salah scoring his 19th league goal of the season – the first from open play at Anfield in 2021 after a drought of almost 13 hours.

But it was Alexander-Arnold – who had starred in the win against Arsenal last weekend but erred in the midweek 3-1 Champions League defeat to Real Madrid – who stole the headlines with a fearsome strike for only his second of the season.

The much-needed win lifted Liverpool into fourth spot, albeit only potentially briefly with Chelsea playing in the late kick-off, and put the pressure on Thomas Tuchel’s side as well as the likes of West Ham, Tottenham and Everton.

Liverpool had not lost a home match in the 10 played on the same day as the Grand National since 1953 but it appeared this one was going the same way as the previous half-dozen after squandering a number of chances and then falling behind.

Seven of the team started in October's shock 7-2 defeat at Villa Park which hinted that maybe all was not well with the defending champions even at that early stage.

Klopp’s selections had been criticised after playing Naby Keita in Spain but after only three Premier League goals since October – and none since the end of January – benching Sadio Mane in favour of Roberto Firmino, himself with only one goal since Christmas, was more understandable.

The decision looked like it had paid off in first-half added-time when the Brazil international thought he had ended his barren spell with a close-range equaliser but after a long review, VAR ruled Diogo Jota had been fractionally offside from Alexander-Arnold’s long crossfield ball.

It did little to improve the mood of Klopp who had seen his side go behind moments earlier having dominated possession and attempts at goal, a familiar failing since Christmas.

Watkins (below), who scored a hat-trick back in October, benefited from errors from both Ozan Kabak and Alisson Becker, his second in five days. 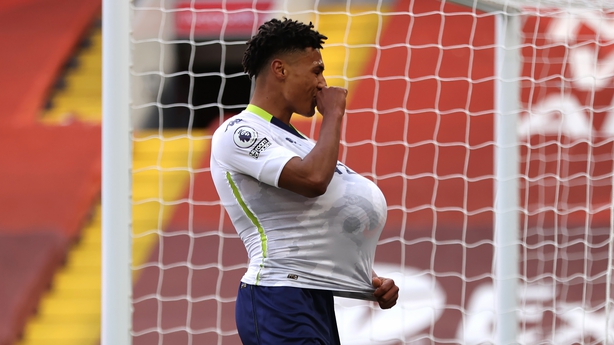 The on-loan centre-back nipped in front of Watkins to intercept but only knocked the ball as far as Douglas Luiz, who transferred it to John McGinn to slide a pass into the striker who took one touch and fired home as, despite Alisson getting a strong hand it, the ball went under his arm.

Salah, who scored Liverpool’s only goal at Anfield in 2021 from the penalty spot, was guilty of missing his side’s best first-half chances as he could not find the net even when gifted the opportunity.

Tyrone Mings completely missed Jota’s pass which left the Egypt international with only Emiliano Martinez to beat but his shot with the outside of his left foot rolled wide of the post.

It was symptomatic of another anaemic performance in front of goal with Salah forcing Martinez to parry behind in only the fifth minute their next-best chance.

Alexander-Arnold whipped a free-kick onto the roof of the net and Jota headed over as the hosts failed to make an impression with 12 attempts on goal in the first half.

Villa had dropped the fewest points from winning positions this season but, faced with opponents motivated by a sense of injustice at the disallowed goal, they conceded 11 minutes after the interval.

Jota had already flashed a shot wide from a narrow angle before Andy Robertson overlapped on the left to unleash a drive which Martinez could only parry into the path of Salah who headed home.

The visitors still offered a threat, however, and Trezeguet hit the inside of the post from Watkins’ lay-off.

Mane replaced Firmino for the final 15 minutes but it was a volley from another substitute Thiago Alcantara which Martinez parried with the ball dropping to Liverpool’s right-back Alexander-Arnold on the left of the penalty area and he delivered with the sweetest of strikes.