Georgie Kelly came back to haunt his old club Dundalk as his 12th-minute penalty earned Bohemians their first win of the season at Oriel Park last night.

Both sides came into the game with just a single point from their opening three league matches to date but it was the 24-year-old - released by the Lilywhites after being shipped out on loan last season - who decided the contest with what was just the second penalty of his career.

Peter Cherrie was selected in goal for Dundalk for the first time since the title-winning final game of the 2014 season but he could do little as Kelly sent him the wrong way after Daniel Cleary had upended Ross Tierney in the box.

Keith Long's side had the better of the exchanges after that and will hope this result can kick-start their season on a day when the club received the good news that the redevelopment of Dalymount Park had moved to the design and planning stage.

For Dundalk, the result means they have equalled the club’s worst ever start to a top flight campaign. 2006 in the First Division was the only year in the club's history where they had less points after four matches having lost the first four games of that season under John Gill.

The last time they had just a single point after four league matches of a Premier Division season was in 1998/99. It would take until the 10th game for Dundalk to claim a win that year with the Lilywhites eventually finishing bottom and dropping out of the top flight for the first time.

While such a prospect looks unlikely now given the Louth men's resources, this result will pile the pressure on their management team of Shane Keegan and Filippo Giovagnoli and with top of the table St Patrick’s Athletic up next their task doesn’t look like getting any easier in the short term. 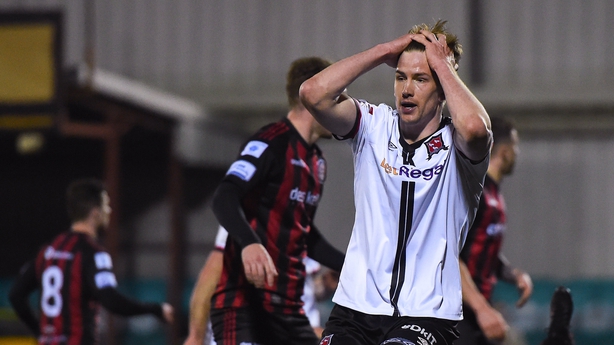 The home side started well on top and should have taken the lead on four minutes when Andy Boyle crashed a header from Michael Duffy’s free kick.

Duffy then pulled a shot just wide two minutes later before Raivis Jurkovskis fired across the face of goal from Patrick Hoban’s cross on 11 minutes.

The Latvian international would be at fault, however, for the lead goal for Bohemians a minute later.

A heavy touch allowed Ross Tierney to skip past him with the youngster hauled down by Daniel Cleary. Kelly then stepped up to what was just the second penalty kick he has ever taken in a game and sent Cherrie the wrong way for what was the 50th league goal of his career.

Dundalk struggled to respond to that setback although Hoban did go close with a header from Duffy’s corner on 27 minutes with the striker’s appeals for a penalty after a bit of wrestling with Rob Cornwall dismissed by referee Rob Harvey.

The Lilywhites then had a let-off on 34 minutes when Cherrie was caught in possession by Kelly but fortunately for them Cameron Dummigan got back to hook clear before Tierney could pounce.

Liam Burt then flashed a snap shot just wide on the stroke of half-time as Bohs went off leading at the break.

Dundalk were almost level within two minutes of the restart after Bohs keeper James Talbot was deceived by Hoban’s attempted flick from Duffy’s cross but James Finnerty was back covering to hook the ball clear on the line.

Patrick McEleney was introduced at half-time in place of Han Jeong Woo and was given a chance to level matters with a free kick on 54 minutes but despite curling his effort around the wall it was straight into the midriff of Talbot.

The 23-year-old then denied Sam Stanton following a goalmouth scramble before Ole Erik Midtskogen flashed a header from Duffy’s corner just across the face of goal in what was his last act of the game on 63 minutes. 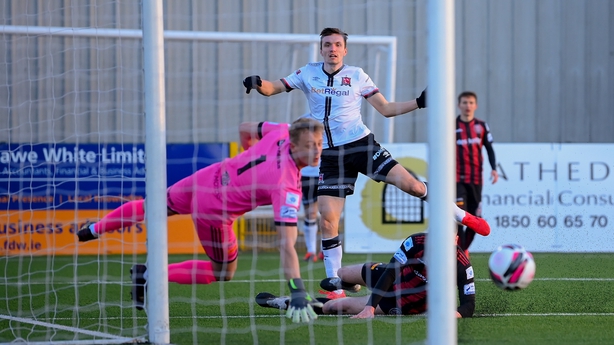 Tierney did have a rare effort for Bohs five minutes later when he sent an acrobatic effort over from Burt’s cross before Finnerty fired over from close range on 70 minutes after Kelly headed down Keith Ward’s corner.

With a trio of changes disrupting Dundalk’s setup, the chances continued to come for the visitors with Rob Cornwall heading just wide from another corner five minutes later.

Kelly then fired over from just outside the box with eight minutes remaining.

Dundalk had strong calls for a penalty with two minutes to go when Darragh Leahy’s cross appeared to strike the arm of Cornwall but referee Harvey waved away the appeals, much to the frustration of the home side.

Despite four minutes of added time the home side couldn’t find a breakthrough with Duffy slicing wide from the edge of the area with their last attempt.