Vera Pauw believes that her side showed Denmark too much respect in the opening half of Thursday night's international friendly at Tallaght Stadium, where the visitors enjoyed a 1-0 victory.

However, the Ireland manager was very proud of her team’s overall performance, as they showed real guts to compete with one of the strongest sides in Europe despite going behind early in the game.

Pauw believes that the future is bright and that the experience will stand to the squad, who learned a great deal about playing a strong side, and about themselves and their ability to compete at this level.

In fact, Pauw was really impressed with how her side learned on the job following a tough opening 45 minutes at the Dublin venue, where Denmark’s style and substance really showed as they dominated the opening period.

The manager revealed that the team were shown a few clips at half-time, which pin-pointed why the Denmark midfield were dominating the play, and Pauw said that her very "coachable" side put it into practice in the second half.

"It was great to get Denmark here," said Pauw, speaking to RTÉ Sport after the game. "They are so powerful and so mobile, and we have learned so much from it.

"In the first half, we could not get it together in midfield, so we brought some clips into the dressing room that the video analyst had identified and that immediately helped.

"It shows how coachable they are and how they understood from two little clips that they could see what the problem was." 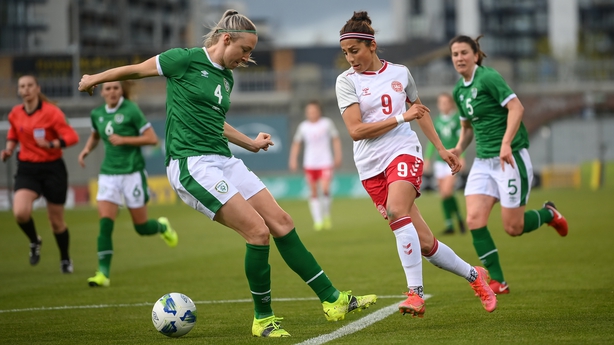 Denmark took the game to Ireland in the opening minutes of the contest and they deservedly went ahead through a Nicoline Sorensen close-range effort in the ninth minute.

In truth, it was a soft goal, despite the excellent build-up play, as the midfielder’s tame effort squirmed through the legs of goalkeeper Grace Moloney, who otherwise, did not put a foot wrong all evening.

And while Denmark continued to dominate deep into the first half, the Irish team showed great resolve and really grew in stature as the match progressed, which really pleased the manager that the team dealt with going a goal behind but also started to put their own game-plan into practice.

"They were getting sharper and sharper as the game was going on, and they felt that they could play against them," said Pauw.

"I’m especially proud that we are not just kicking the ball away, it only happened two times in the first half and maybe at the end of the second a few [times]. But they are really trying to keep the ball to build up in the way that we discussed and the way that we train.

"I am very proud that they have the guts to do that against an opponent like this."

Pauw admitted that she was disappointed to lose the game to such a soft goal, but she said that her team should learn from a quality outfit like Denmark, especially in attack.

The Danes are ranked 14th in the world, however, Pauw believes that they should be a lot higher on the FIFA list based on current form having beaten Italy 3-1 away from home in their recent Euro qualifying campaign, where they won nine and drew one game – at home to Italy – to top the group and go through to the tournament in 2022. 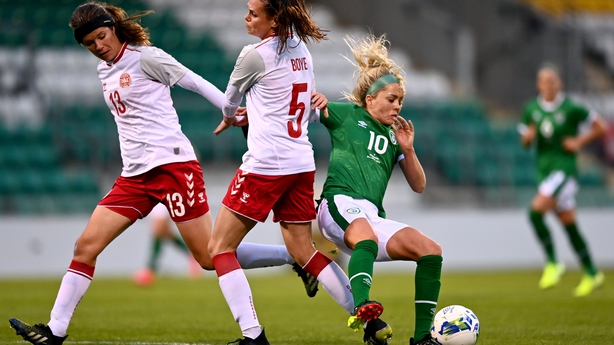 Overall, the manager feels that the Irish team do not realise how good that they can be, and believes that these friendly games can help her side reach their potential heading into the upcoming World Cup qualifying campaign.

"It is what they said themselves, that they showed them too much respect in the first half," said Pauw. "And they actually found out, they don’t know how good they are. They don’t know it yet.

"You have to feel how good you are and these games are invaluable for that, because without these games you will never find these limits, and in the second half they went a step further."

Ireland competed with Denmark throughout the second half and very nearly got back on terms following a Katie McCabe thunderbolt, which cannoned off the crossbar.

The Arsenal midfielder was kept quiet in the first half, marshalling the left wing-back position, but pushed on in the second half, driving the team on and coming close to grabbing the equaliser.

Pauw admits that getting McCabe in advanced positions is a real strength that they the side need to utilise, and the manager also believes that the team need to be braver in front of goal to make things happen in the final third.

"Also we need to have more guts in front of the goal. We are a bit shy in front of goal. You can only score if you really have the guts to throw yourself into it.

"The players are not afraid. They have the guts and want to play. It’s just experience.

"We have the talent, we have lots of talent, and there is more talent coming in. It is a bright future."