Marcus Rashford shook off injury concerns to help Manchester United to victory at Granada as Ole Gunnar Solskjaer's side took a giant step towards the Europa League semi-finals.

The 23-year-old limped out of Sunday’s win against Brighton on his return from the ankle complaint that ruled him out of England duty and Solskjaer selected him on Thursday despite admitting the forward was not fully fit.

Rashford looked in discomfort within minutes of kick-off in Spain, but he dug deep and capped his bright first-half performance by opening the scoring when giving Victor Lindelof’s outstanding pass the finish it deserved.

Rashford was replaced in the 65th minute and Fernandes added another away goal at the death heading into a second leg that Scott McTominay, Luke Shaw and Harry Maguire will miss through suspension.

Granada did not seriously test recalled goalkeeper David De Gea on a night when hordes of fans locked out of the game instead lined the streets hoping to inspire the LaLiga side to a famous result.

One individual did get in, sans clothing, and disrupted the early stages of a tie that was not even five minutes old when Rashford was grimacing.

The 23-year-old was able to continue and looked United's biggest threat during a turgid opening period, failing with a hopeful free-kick and then bending wide of the top right-hand corner.

Granada offered just as little as they seemed more intent on keeping their defensive shape, with Chelsea loanee Kenedy lashing over and ex-Tottenham striker Roberto Soldado hitting into the side-netting on rare attacks.

The latter chance inadvertently led to United scoring, with De Gea playing the ball short to Lindelof and watching the centre-back take the ball forward before sending a wonderful ball over the Granada backline.

Rashford made a great run and expertly controlled the pass, then continued to show strength and composure under pressure to slot home a fine 31st-minute effort. 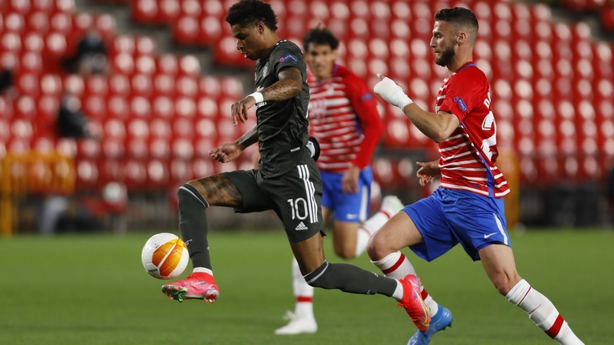 That opening goal appeared to awaken Granada, who ended the first half in the ascendancy.

Yangel Herrera, on loan from Manchester City, hit the post with a cross-shot from a quickly-taken free-kick, with Soldado and Kenedy also having opportunities.

McTominay and Shaw picked up bookings that rule them out of the second leg before the break, with the latter replaced by Alex Telles when the teams re-emerged.

De Gea dealt well with a fizzing half volley from Kenedy in the opening minutes of the second half, but United looked in control and Maguire was given space to dart forwards and flash an effort wide.

Paul Pogba headed off target before Edinson Cavani replaced goalscorer Rashford in the 65th minutes, with the veteran failing to read a superb cross from the left by Telles soon after.

Recalled De Gea had to deal with another thumping Kenedy strike as the visitors continued to keep Granada at bay, although Maguire was angered when booked for fouling Soldado.

Granada goalkeeper Rui Silva produced a great save to deny Fernandes unaware that the playmaker had strayed offside, with Nemanja Matic picking up United’s fifth booking of the night.

While the officiousness of Artur Dias irked United for the most part at the Estadio Municipal Nuevo Los Carmenes, the referee helped the visitors wrap up victory – and perhaps progress – at the death.

Substitute Yan Brice was adjudged to have fouled Fernandes when a cross came in and the playmaker stepped up for the resulting spot-kick, which he just squeezed home in the 90th minute as Silva somehow failed to keep it out.