Nicoline Sorensen's early effort proved decisive as Ireland were beaten 1-0 by an impressive Denmark side in tonight’s friendly international at Tallaght Stadium.

The visitors struck in the ninth minute as midfielder Sorensen’s close-range effort appeared to slip through the legs of Ireland goalkeeper Grace Moloney.

Vera Pauw’s Irish outfit were outplayed in the first half but improved significantly after the break with Katie McCabe coming close to levelling matters with a venomous strike rebounding off the crossbar.

Denmark had chances to secure the victory but Ireland remained in the game throughout and will be encouraged by their efforts ahead of Sunday’s game in Belgium.

A strong selection from Ireland manager Pauw to welcome the world number 14-ranked side, and the home team started well, putting the Danish defence under pressure in the early exchanges.

But the visitors were soon into their stride, knocking the ball around at will with both wing-backs hugging their respective flanks, and really stretching the Ireland side when in possession.

It took Denmark about five minutes to get into the game, and it took them just a further four to take the lead, as their patient precise play started on the left, worked through the middle with Nadia Nadim and Signe Bruun linking up before a ball was lifted to the back post where Sorensen had time to direct her effort goalwards.

The close-range effort squirmed under Moloney with Niamh Fahey on the line unable to prevent it from hitting the back of the net. The keeper will be disappointed not to have saved the relatively tame effort.

Nadim had a shot saved in the 13th minute after Louise Quinn was nutmegged inside her own penalty box – the PSG striker opted to go for the near post but her shot was lacking power.

Despite being the home side, Ireland's only option was to break on the counter-attack and Amber Barrett almost got in on goal after Denise O'Sullivan rolled a perfect ball through the last line.

But Danish keeper Lene Christensen was quick out to the edge of her box to take the ball just ahead of the Ireland striker who claimed that the ball was handled outside of the area – it was marginal but looked like it was just stopped in time.

Ireland eventually settled into the game midway through the half as they looked to work the ball through midfield with Megan Connolly and O'Sullivan linking well, yet the attacking threat remained limited with wing-backs Keeva Keenan and Katie McCabe unable to dictate the tempo on either flank.

Denmark continued to attack at will, despite lacking their initial intent, and Moloney was called into action just after the half-hour mark as she made a fine save to tip Bruun’s well-hit shot over the bar.

Then six minutes before the break it looked as though the second goal would arrive as Nadim arrived on the edge of the box and spotted the Ireland keeper off her line. A neat lob looked to be dropping into the net but somehow Diane Caldwell got back to head the ball clear from under the bar.

Ireland got in at the break just trailing by the solitary strike and the manager made changes at half-time, sending Shelbourne's Emily Whelan on for Heather Payne, who had worked tirelessly up front but with little reward. 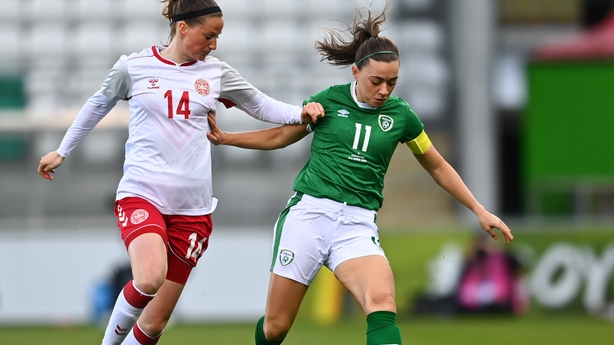 And the Irish outfit looked a different side straight away with the energetic Whelan looking lively on the ball with both wing-backs now pushed on.

Ireland were almost level in the 53rd minute as McCabe unleashed a rocket with her left foot from about 30 yards. The swerving effort looked to have Christensen beaten but the Arsenal midfielder was denied by the width of the crossbar as the ball cannoned off the woodwork.

Ireland maintained the pressure and a 67th minute set-piece brought another attempt on goal but this time, McCabe's low effort raced beyond the far post.

Moloney continued to atone for her earlier error and made another fine stop in the 68th minute as Bruun raced clear and smashed a fine effort at the keeper's near post. The Reading stopper stood tall and parried the shot around the post to keep Ireland in the game.

The game opened up in the final 20 minutes with Denmark looking to seal the game and they had a chance to secure the victory as Sorensen's low effort had Moloney at full stretch to parry the ball away, and if not for some alert Caldwell defending, Pernille Harder would have had the simplest of tap-ins.

Ireland huffed and puffed in search of an equaliser throughout the final ten minutes and Whelan's injury-time effort from the right was the closest they came as the substitute's shot flew into the side-netting.

Plenty of positives to take to Brussels for the second game of the international window against Belgium but Ireland will rue that sloppy start which ultimately cost them the game.