Mbappe struck twice in a snowstorm at the Allianz Arena, with Neymar setting up both his double and Marquinhos' first-half goal.

Bayern, who fought back to make it 2-2 against the side they beat in last season’s final through Eric Choupo-Moting and Thomas Muller, suffered a first home loss since November 2019.

In an explosive start to the first leg, the visitors forced their way ahead after just three minutes when Kylian Mbappe blasted a shot through Manuel Neuer's legs after Neymar had picked him out unselfishly at the end of a pacey counter-attack.

Muller passed up a glorious 10th-minute opportunity to level when he stabbed his shot straight at goalkeeper Keylor Navas, who made fine saves to deny Leon Goretzka and Benjamin Pavard in quick succession as Bayern attempted to hit back.

The holders, who were without injured 42-goal striker Robert Lewandowski, were in deep trouble after 28 minutes when Neymar’s ball over the top allowed Marquinhos to control before firing past the helpless Neuer.

However, former PSG striker Choupo-Moting, who had hit the crossbar seconds before the opening goal, dragged the home side back into it nine minutes later with a firm downward header from Pavard’s cross. 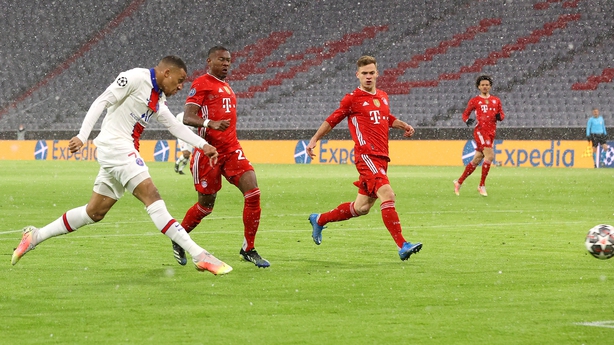 Neuer went some of the way towards redeeming himself with a vital point-blank save from Neymar six minutes after the restart, but opposite number Navas had to save from David Alaba and Pavard within seconds as the Germans returned with renewed vigour.

They got their reward on the hour when Thomas Muller timed his run and jump to perfection to meet Joshua Kimmich’s free-kick before guiding a header past Navas to square it at 2-2.

But the French champions regained the lead within eight minutes. Neymar played Mbappe in behind the Bayern defence and, as substitute Jerome Boateng arrived to confront him, the striker fired through the defender’s legs and past Neuer.

Alaba shot inches wide when he might have done better with four minutes remaining as PSG held on to leave Bayern boss Hansi Flick tasting defeat in the competition for the first time in his reign.