Irish teenager Andrew Omobamidele is enjoying a great start to his Norwich City first-team career, with manager Daniel Farke singling out the young centre-half for special praise in the drubbing of Huddersfield.

The Championship leaders moved to within touching distance of an immediate return to the Premier League after last night's 7-0 victory and now require just five points from their remaining six games to guarantee promotion.

Leixlip centre-half Omobamidele, 18, was paired alongside Grant Hanley at the heart of the Norwich defence, and in truth had a comfortable evening as the Canaries led 5-0 lead at the break. Second-half goals from Kieran Dowell and substitute Jordan Hugill completed the rout.

It marked Omobamidele’s third appearance since making his debut in a 1-1 draw against Preston on Good Friday and his second successive start, alongside the experienced Scot who was making it a century of appearances in yellow.

The Republic of Ireland U-21 international, who has represented his country from U-17 level, has yet to taste defeat at club level and is quickly impressing his peers.

"He’d better not get used to that because it’s not like that every week in the Championship as we know," captain Grant Hanley told the club’s website.

"He’s been outstanding in the last couple of games - so composed as a young lad coming into the first team ready to take his opportunity. He deserves a lot of credit for that."

Speaking after the match, manager Farke paid tribute to his defenders for another clean sheet on their march to promotion.

For Andrew, back-to-back really good performances for him

"It was a team effort. We made the defender’s lives easier because we pressed with such intensity," he said.

"To be there when it counts, although you can watch for five or ten minutes without being that involved, to play without mistakes is not easy and it’s what Grant and Andrew have delivered.

"For Andrew, back-to-back really good performances for him and that we were able to return with a clean sheet is a great reward for them both and the whole team." 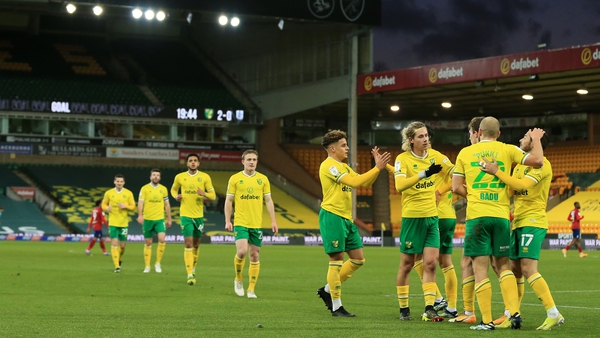