Pep Guardiola backed the officials after Borussia Dortmund had a goal controversially disallowed in the first leg of their Champions League quarter-final against Manchester City.

England international Jude Bellingham was denied in the first half of the German side's 2-1 defeat at the Etihad Stadium when Romanian referee Ovidiu Hategan ruled he had fouled Ederson.

Replays suggested the goalkeeper had hurt himself kicking Bellingham after the forward won the ball cleanly.

Dortmund did eventually score to cancel out Kevin De Bruyne’s opener through Marco Reus six minutes from time, but Phil Foden gave City the edge with a last-gasp winner.

Asked about the incident, City manager Guardiola initially said: "Listen, it is better not to talk about referees in the Champions League.

"I’m not going to speak now. We have a huge list about this kind of situation in this competition so it’s better to make no comment. The ref made his decision and that’s all."

Guardiola was willing to speak a little bit more about the officials later, however, when asked about the sight of one of the assistant referees asking Dortmund forward Erling Haaland for his autograph after the game.

There was further controversy in the match when City were awarded a penalty but Hategan reversed his decision after viewing the pitchside monitor.

He said: "I didn’t see it but maybe he’s a fan of Haaland and he’s here, so why not?

"The referees were brilliant. The game was not a problem. It was a penalty but the people saw the VAR and it was not a penalty.

"After the Bellingham action the leg is higher than expected, so the referee and linesmen were correct, perfect. They did a good job. That’s all. Nothing happened."

"I definitely think I won the ball fairly," he told BT Sport. "It's a bit frustrating at a time when they’ve got so many cameras and so many TVs watching the game that they don’t wait for me to put it in the net and then check it. It’s football and it’s life, we have to get on with it, really.

"All I got told was that I got booked and it's going to be a free-kick for them. I think they should have checked it but apparently I had my studs up, caught the goalie and it was a foul." 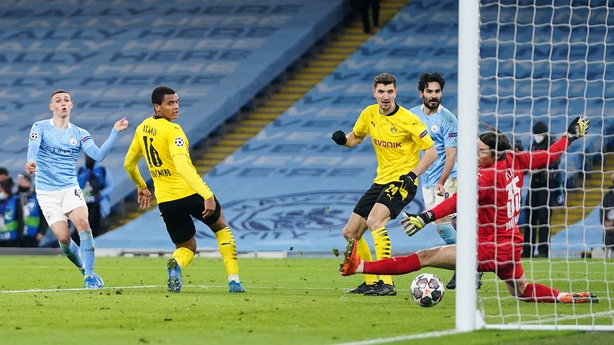 City have been knocked out in the quarter-finals for the past three seasons.

Guardiola insisted City will not sit back as they attempt to go one better in the second leg next week.

He said: "We are going to go there to win the game. We will try to get the result we need, but of course the victory is the best result. We are going to Dortmund, absolutely, not to defend."

Dortmund's interim coach Edin Terzic admitted his side were frustrated by the decision to disallow Bellingham’s goal but refused to dwell on it.

He said: "For me it is not a foul but he blew the whistle straight away. If he would let the ball in, he can go to the screen, have a check and make a decision.

"This is something that annoyed us but this is a game of mistakes. Sometimes it is not the players making the mistakes. We have to accept it and do it better."

Terzic felt his players still performed creditably and remained optimistic they could turn the tie around in the second leg next week.

He said: "It’s the Champions League, the quarter-finals and Manchester City and if you make mistakes they will cost you.

"But we are very satisfied with the performance. It’s annoying not to come away with a draw but there are a lot of positives.

"We know Manchester City will play this type of football in every match, so the principles will not change a lot. We know we will have space and have the conviction we can go through."