Struggling Sheffield Wednesday stunned play-off hopefuls Cardiff with a 5-0 win at Hillsborough to lift themselves off the foot of the Sky Bet Championship.

Three of the goals came in the first 23 minutes, with Julian Borner, Callum Paterson and Adam Reach all on target.

Jordan Rhodes added a fourth goal approaching the midway point in the second half, before Reach rounded off the scoring with his second of the match.

Wednesday, who had won just once in their previous 10 games, had slipped to the bottom of the table following Wycombe's win at Rotherham earlier in the day. They are now six points from safety.

The result completed a miserable Easter for Mick McCarthy's Cardiff, following their 1-0 defeat at home to Nottingham Forest on Good Friday. 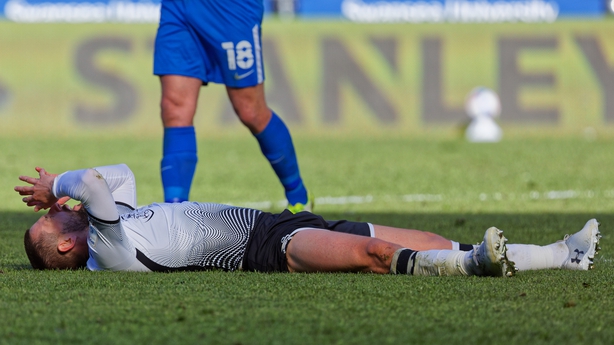 Republic of Ireland midfielder Conor Hourihane returned from injury to feature for Swansea but the Welsh side fell to a 1-0 defeat at home to Preston North End.

The Cork man had missed Ireland's three international fixtures against Serbia, Luxembourg and Qatar after being forced off in the first-half against Cardiff City on 20 March, before being included in last Friday's matchday squad for the defeat to Birmingham City, although he was not introduced on that occasion.

He started for the Swans today, however, their struggles in front of goal continued.

It proved to be a positive day for leaders Norwich, who are not in action until Tuesday when they host Huddersfield Town, as second-placed Watford also failed to win, with the latter surrendering a lead to draw 1-1 at Middlesbrough.

Daryl Dike's brace boosted fifth-placed Barnsley's surprise play-off push as they won 2-1 against Luton, who had Ireland striker James Collins on the scoresheet, at Kenilworth Road to move within a point of the Swans.

United States forward Dike squandered the chance to claim a hat-trick after seeing a penalty saved by Hatters goalkeeper Sam Sluga before Collins' consolation set up a nervy finish.

Bournemouth kept up the pressure on the Tykes and Royals with a 2-0 success against Blackburn.

In-form duo Philip Billing and Arnaut Danjuma were on target either side of half-time at Ewood Park to keep Jonathan Woodgate's men a single point outside the top six, while Cherries goalkeeper Asmir Begovic saved a late spot-kick from Adam Armstrong.

Millwall enhanced their slim play-off hopes as goals from Murray Wallace and Mason Bennett, either side of Jacob Brown's equaliser, secured a 2-1 victory at Stoke.

At the bottom, relegation-threatened Wycombe boosted their slender survival hopes by inflicting a damaging 3-0 defeat on fellow strugglers Rotherham.

The 22nd-placed Millers, who have games in hand on the teams around them, remain two points above Gareth Ainsworth's visitors following an eighth loss from 10 games.

Leo Ostigard's early strike and a second-half penalty from Matt Godden put the Sky Blues in control before Viktor Gyokeres ensured they would move seven points above the drop zone after Robins forward Nahki Wells pulled one back.