Bayern Munich moved seven points clear at the top of the Bundesliga with a 1-0 win at title rivals RB Leipzig.

Midfielder Leon Goretzka broke the deadlock at the Red Bull Arena when he fired a cutback from Thomas Muller into the top corner late in the first half.

Marcel Sabitzer forced Bayern keeper Manuel Neuer into a fine save with a long-range effort, but Leipzig could not find an equaliser as Bayern recorded a seventh straight win in all competitions.

Borussia Dortmund slipped further off the pace as they were beaten 2-1 at home by Eintracht Frankfurt.

Josip Brekalo's strike midway through the second half was enough to give third-placed Wolfsburg a 1-0 home win against strugglers Cologne while Bayer Leverkusen kept up their European qualification push with a 2-1 victory over bottom club Schalke.

A late goal from Andreas Voglsammer helped relegation-battlers Arminia Bielefeld secure a 1-1 draw at Mainz, a brace from Marcus Thuram saw Borussia Monchengladbach come from behind to beat Freiburg 2-1 while Augsburg were 2-1 winners against Hoffenheim. 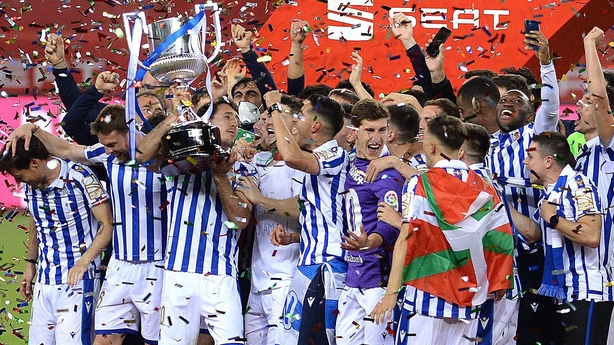 Marco Asensio and Karim Benzema were on target in each half as Real Madrid marked Zinedine Zidane’s 250th game in charge with a 2-0 win over Eibar.

Victory moves Real above Barcelona and three points behind Atletico Madrid ahead of next weekend’s El Clasico.

Mikel Oyarzabal’s penalty just after the hour proved enough to secure the silverware for the delayed competition, which was rescheduled because of the coronavirus pandemic.

Athletic will return to the Estadio de La Cartuja to face Barcelona on 17 April for the 2021 final.

Elsewhere in Spain, a hat-trick from Gerard Moreno saw Villarreal win 3-0 at Granada while Osasuna versus Getafe ended goalless. 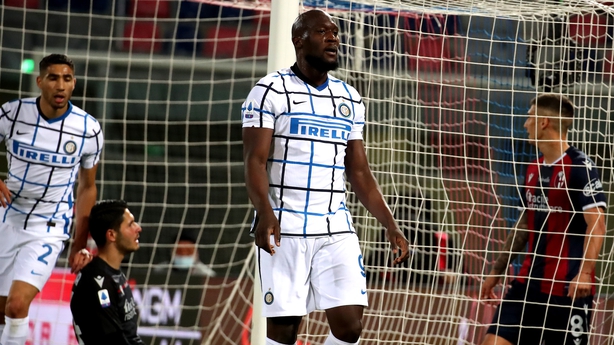 Serie A leaders Inter Milan tightened their grip at the top of the table with a 1-0 win at Bologna.

Romelu Lukaku’s 32nd-minute goal edged the Nerazzurri closer to their first Scudetto in more than a decade.

Cristiano Ronaldo headed in an equaliser with 10 minutes left as Juventus drew 2-2 in the Derby della Mole at Torino.

Luis Muriel scored twice as Atalanta beat Udinese 3-2 to keep themselves in the driving seat for Champions League qualification and Napoli edged out bottom club Crotone 4-3.

Lazio had Manuel Lazzari and Joaquin Correa sent off during stoppage time of their 2-1 win over Spezia while Roma saw their European push dented with a 2-2 draw at Sassuolo.

Franck Ribery was sent off in the second half as Fiorentina drew 1-1 at Genoa, Parma drew 2-2 at Benevento while Hellas Verona beat Cagliari 2-0.