Nottingham Forest manager Chris Hughton believes teenage talent Alex Mighten is developing into a key player for his side after helping them to a 1-0 victory over Mick McCarthy's Cardiff.

The 18-year-old England youth international, who was born in the United States, delivered an impressive first-half performance as Hughton's men moved 10 points clear of the Championship relegation zone.

Manchester United loanee James Garner secured their first win in six matches with a 29th-minute strike, and the defence held firm to deny the hosts an equaliser.

And Forest manager Hughton believes Mighten will continue his development during the league run-in.

"It's a good opportunity for him now," he said. "It's not just about what he can give us going forward, it's about him trying to be an integral part of the game and that doesn't just mean defensively, that means ball retention and looking to go forward and take players on when those moments come.

"It would have been a fantastic learning curve for him out there in a tough game with the responsibilities he had.

"What we expect from our wide players is to have good shape and defend, but to get forward and produce as well.

"We had to battle, every player had to be resolute and we had to concentrate.

"The goal was a super goal and one I loved seeing. We've got into those positions on a number of occasions but it was great to see it go in at an important time."

For Cardiff, the defeat saw them lose ground on the likes of Bournemouth, who moved four points clear of the play-off chasing Bluebirds with a game in hand.

But manager Mick McCarthy is not giving up on his top-six aspirations.

"If we can win on Monday and get back to winning ways, because that's what we'll have to do, then we will still be pecking away," he said. "I won't be giving it up."

"We just didn't have that bit of luck or bit of quality at the end to finish it.

"I'm pleased with the reaction second half, I thought they were very good, but we needed to start that way and we didn't.

"But I have to give Forest some credit for that, there is a team on the pitch trying to stop us.

"Forest played well and we couldn't really get to grips with it, get closer to them to stop them.

"Maybe the fact we had been away, so many players, some have trained, some have not trained that much after international duty. And maybe it's just fragmented.

"I was saying beforehand, 'Let's get up to the standard we've been', and we just didn't." 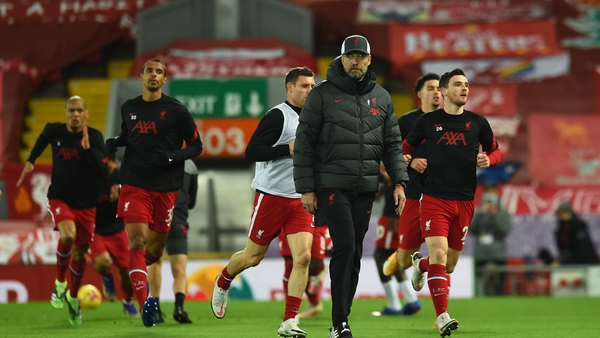 Jurgen Klopp: Liverpool have to 'go for it' in chase for top four