The 'big two' of the SSE Airtricity League clash on Friday night live on RTÉ2, but it's a very different story from a similar fixture just over 12 months ago.

It was 13 months ago when the rising Hoops saw off the Lilywhites 3-2 in front of thousands of fans in Tallaght Stadium.

Jordan Flores scored one of the greatest goals seen in the league, and the fixture itself has been mentioned as a modern day classic.

Much has happened in the intervening period. Crowds have sadly temporarily disappeared; the Hoops have not lost in the league and have taken on the mantle of top dog.

Dundalk have played Europa League football and appointed two different managers in Filippo Giavognoli and now Shane Keegan. There is a new-look squad at Oriel Park, and the season has started poorly.

Last week’s 2-1 defeat to Finn Harps has put pressure on Dundalk not to fall too far behind while all of their new faces settle in.

The Hoops had a weekend off last week because of international call-ups for Derry City, so it leaves both sides in the bottom half at this early stage.

Shamrock Rovers: No injury worries but Roberto Lopes is in quarantine after playing for Cape Verde during the international break. Lopes helped his country to a 3-1 win against Cameroon in the African Cup of Nations qualifiers.

Dundalk: Ole Eriks Midtskogen is back in contention while Patrick McEleney is also hoping to be involved. Daniel Kelly and Sean Murray are out but Raivis Jurkovskis is available after missing the Finn Harps game through international duty. Sonni Nattestad is suspended.

Stephen Bradley (Shamrock Rovers manager):  "I think every game is a big game and this is no different. They're all big games. It’s just that we’re a team that want to win every game we play and that’s the way we play. I’m sure teams that come up and play us are the exact same and it adds to the game.

"When you’re playing a good side, which Dundalk are, it always turns into a competitive game. They’re always good games."

Shane Keegan (Dundalk manager): "Everybody is chomping at the bit to try and redeem their individual and collective reputations after last week's defeat to Finn Harps.

"It doesn't matter who the opposition is but it probably does add extra focus to have Rovers. When we're playing against the really, really top teams, that does seem to bring the most out of us and you'd be hoping that will be the case again Friday.

"There's plenty of needle between both sides, that's for sure. There's no getting away from that. It's genuine, it's not put on or it's not fake. It adds to the game." 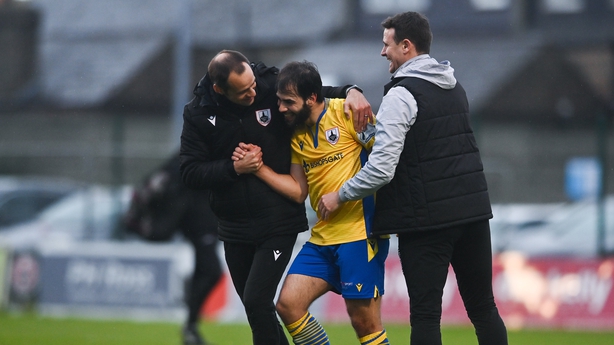 On a night of two Premier Division games, few would have predicted this would be the top of the table clash on the night rather than in Tallaght.

Either side can move to the summit with a win after promising openings to the year.

Longford have defied early season predictions by taking four points so far on their return to the top flight, including the impressive comeback last week against Bohemians when 2-0 at half-time to secure a point.

Sligo have shown their credentials for repeating a top-four finish with an equally good start. The Bit O' Red back up their draw with Dundalk by beating Waterford last week.

Liam Buckley's side scored two outstanding goals and will be hopeful of another result on the road this week.

Longford Town: Rob Manley is set to be Longford's only absentee.

Sligo Rovers: Lewis Banks will have a late fitness test on a thigh strain. Rovers have no other concerns.

Daire Doyle (Longford Town manager): "We know the threat that they'll pose," he told The Longford Leader. "I didn’t get to watch their game against Waterford because we were on a Zoom call and were prepping for the Bohs match. I saw the goals and some highlights but I will watch the whole game.

"Everything is about our game. We have proven over the last couple of matches we are here because we deserve to be here."

Liam Buckley (Sligo Rovers manager): "We were happy with the result in Waterford. There is room for improvement on the performance. We are in some transition, with the new players we have brought in this season, and the most important thing is to pick up points. We've done that so far and hopefully we can continue on Friday evening.

"The other positive was how we stuck at it last week. We went 1-0 down which we were disappointed about. Ed made a couple of great saves and the goals we scored to win the game were top class.

"Romeo’s finish was outstanding and Jordan’s shot, it was right in the angle of the goal and you couldn’t position it any better.

"Longford have done very well so far. They've kept their core group and added even more quality as well. I’ve no doubt that it helps them to have that consistency there from last season.

"They're going to put it up to up us, we know that. We go there looking to build on the win last week."

Follow Shamrock Rovers v Dundalk via our live blogs on RTE.ie and the RTÉ News app or watch live on RTÉ 2 and RTÉ Player from 7.30pm