The Derby County captain started at the Aviva Stadium but it was a hugely disappointing night as the visitors plundered a 1-0 win that badly damaged Ireland's qualification ambitions.

"It was a terrible result and something we have to reflect on and ultimately do better in our next game," Knight told RTÉ Sport ahead of tonight's friendly against Qatar in Hungary.

"There were [harsh words afterwards in the dressing room]. I think that's only natural when you lose a game, you've got to be honest with each other and honest with yourself.

"There's a real energy to put things right from the other night. It's got to be a catalyst for future games and what we can bring forward for the country. We want to make things right."

Knight, 20, has made tremendous progress over the last two years. Derby boss Wayne Rooney is a huge admirer of his talents, handing the former Cabinteely midfielder the captain's armband last January, and he is fully expected to establish himself as a key man for his country going forward.

Highlighting the influence of his father and brother Kevin, who plays in the League of Ireland First Division and previously had a spell with the Leicester City academy, Knight said: "It's been a good journey so far.

"It's been a crazy last two years I suppose. I'd always been at Cabinteely since I was young and then I went over when I was 15, 16 for my scholarship at Derby. It's been a great turn for the club, getting that League of Ireland status.

"It's always been a really good environment, a family-orientated club. It was only down the road from my house so that was the key factor.

"All my brothers play for the club [which fields amateur sides in the Leinster Senior League] but my older brother Kevin plays for the League of Ireland team.

"He's been there and done it in England, he was a great help for me when I was going over and getting started. 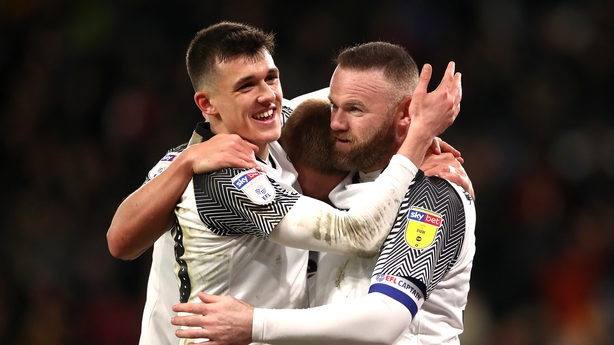 "It's difficult. It's a different environment, leaving your family and your friends behind. I was fortunate that I was sort of drip-fed into it. I went over a couple of weeks at a time. Also I had my brother and dad for advice when I needed it. It's a hard environment but it's a really rewarding one at the end of it.

"[Rooney] has been great with me since he's come in. He's put a lot of trust in me, giving me the captaincy. That gave me a real boost... I was really thankful for that."

Knight is hardly an elder statesman but in a youthful Irish set-up he hasn't been the rookie in the camp either. Gavin Bazunu shone on his senior debut against Luxembourg, with Knight happy to praise the keeper's impact.

"Gavin has been great since I've known him, then he came through with the Under-21s and the senior team. he's been a really good lad around the place and he's been very vocal as well for a goalkeeper so young. Hopefully there's many more appearances from him to come.

"I want to play as many games as I can because it's always a really big honour to play for your country. Ultimately you want to do better than your last game. That's what we're all trying to do.

"[To captain Ireland] would be a dream come true but that's a long way in the future. For now I'm just focused on doing well when I'm asked to play."