Hal Robson-Kanu, Rabbi Matondo and Tyler Roberts have been sent home for breaching Football Association of Wales protocol and will miss Tuesday's World Cup qualifier against the Czech Republic.

The trio have been released from camp, with Leeds striker Roberts apologising on social media - in a post which has since been deleted - for staying up too late and breaking a curfew at the team hotel.

"The three players will be returning to their respective clubs this afternoon.

"The FAW will not be making any further comment."

The three players were all hoping to be involved against the Czechs as Wales seek to put their first 2022 World Cup qualifying points on the board after losing their opening game in Belgium last week.

Roberts said, in the now-deleted post: "Gutted to be leaving the camp early, but rules are rules and I shouldn't have been up later in the hotel than the set time.

"Sorry to the team, staff and Wales fans. I will continue to work as hard as I can to earn my place in the squad for the euros."

The three players being sent home is the latest blow for a Wales squad, who have been without manager Ryan Giggs for the last two international camps.

Giggs was arrested on suspicion of assault on November 1. He denies the allegations and has had his bail extended until 1 May.

Robert Page has taken control in Giggs' absence, winning three, drawing one and losing one of his five games in caretaker charge.

Welsh football has been in further disarray behind the scenes with chief executive Jonathan Ford leaving after a vote of no confidence from the FAW council. 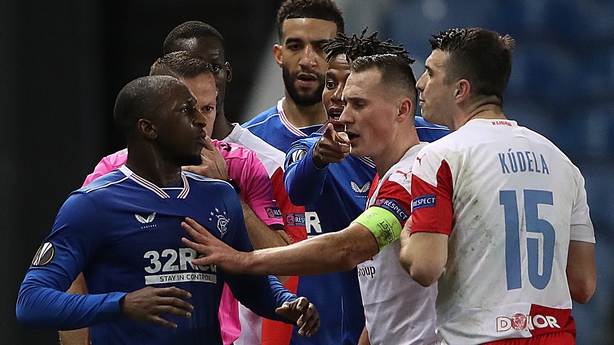 Czech defender Ondrej Kudela has travelled to Wales after all despite his club Slavia Prague initially refusing to allow him to play in Tuesday's qualifier.

Centre-back Kudela was accused of racially abusing Rangers midfielder Glen Kamara during a Europa League tie at Ibrox on 18 March.

Kamara reacted with fury when Kudela wandered alongside, cupping his hand before allegedly whispering a discriminatory slur – according to the Finn’s statement – into his ear.

Slavia and Kudela have denied the claims, while UEFA has launched an investigation.

Police Scotland are investigating the racism allegations and Slavia said last week that Kudela would not be released for the Czechs’ World Cup qualifying clash with Wales.

Slavia expressed fears over Kudela’s safety if he returned to the UK and the 34-year-old’s lawyers issued a statement on his behalf.

Czech Republic manager Jaroslav Silhavy said at his pre-match press conference: "We are not going to specify the safety measures but, of course, we are proceeding with the wish of the player and the players.

"The team is happy that Kudela is here with us and they are ready for the match.

"It’s obviously quite uncomfortable what’s happening, especially for Ondrej. But I don’t think it’s affected him and he’s prepared for the match.

"It was clear for me that I wanted him here and I would like to thank those that could sort it out for Ondrej to be with us."