Former Republic of Ireland player and manager Eoin Hand believes that Stephen Kenny might be better suited to heading up a new Irish youth academy than managing the senior national team.

Kenny remains winless during his 10-game tenure in charge of the Irish team and a shocking defeat at home to Luxembourg on Saturday appears to be a hammer blow to any hopes of qualifying for the 2022 World Cup.

Speaking on RTÉ's Claire Byrne Show, Hand claimed that Kenny has got it wrong from day one in the Ireland job, in trying to overhaul the system that the team plays.

Kenny has dropped the traditional defensive and direct attacking Ireland game for a more open possession based approach and for Hand, this is not something that can be done overnight, particularly given the players at his disposal.

"I think that he started in the wrong way, as far as I'm concerned," he said "This whole thing about coming in and talking about an 'evolutionary style of football’.

"It’s a very basic concept really – you don’t build anything from the top down, you start at the bottom and it’s a much bigger picture.

"That is nigh impossible for international footballers who are playing a certain way with their clubs in England all their lives and then you’ve got them for maybe three days before you play a vital game and you ask them to play a totally different way.

"I think that he made that mistake at the start of it all, before this series of matches. But the one that must learn from all this is Stephen Kenny himself, you cannot do this, you must get players who are accustomed to doing what they’re doing every training day and every week with their clubs.

"Stephen is in there to get results, that’s it, that’s the bottom line. Results are the big thing, to get results and to qualify, that’s gone now.

"We’re lucky that there were no crowds during that game on Saturday because there would have been remonstrations afterwards it was that poor." 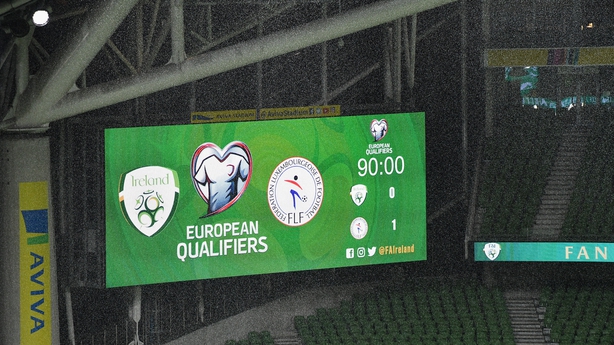 Hand believes that a radical change in approach and tactics is only possible over the long term and advocated the creation of a new national soccer academy.

While he didn’t call for Kenny to step down from his current role, he did claim that the Ireland manager might be more suited to overseeing such an academy than managing the senior side.

"I think that Stephen’s attributes are very, very strong but I think that they could be used in a much better way.

"Really I think this is a story about an academy, a national academy that should have happened way back in 2005. It was on the cards but it never happened, that’s another story.

"Stephen could be in charge of all the aspects of the way you want to be teaching and educating our players, to ally our natural strengths with more technical skill. That’s the big picture.

"It could be a way to move aside without losing that much face. Because Stephen looks very uncomfortable with his interviews and that, and the national job is a huge, huge job and a huge step for him.

"I think Stephen’s assets would be employed much better in that direction."

Former Ireland manager Eoin Hand has his say on the current situation in the wake of the World Cup qualifying loss to Luxembourg #RTESoccer pic.twitter.com/2zaya41As6