Cork City made the perfect start to life in the SSE Airitricity League First Division as they defeated local rivals Cobh Ramblers at Turner's Cross on Friday night.

Goals from Cian Coleman and Cian Bargary, either side of a Ramblers equaliser from Ciaran Griffin on his debut, was enough to earn Colin Healy’s side the three points from a highly entertaining Cork derby.

This was the first league meeting between these two Cork clubs since 2008 and both sides started with intent.

The visitors were the first to go close inside the opening minute but Griffin could only blast his shot straight at veteran goalkeeper Mark McNulty from a good position on the edge of the penalty area.

Then in the fourth minute City created a glorious opportunity but after the ball broke kindly to him in the box, winger Dylan McGlade composed himself before rattling the underside of the crossbar with his effort.

The home side again threatened on the quarter-of-an-hour mark. Bargary charged towards the Rams goal but his low, powerful strike from 20 yards was brilliantly tipped wide of his bottom left corner by Sean Barron.

The Rams’ best attempts at breaking the deadlock came from distance as Darren Murphy tried his luck from long range after half an hour but McNulty was able to parry before gathering the ball at the second attempt.

That save proved to be crucial as City edged in front moments later with a set-piece move straight from the training ground, albeit there was some good fortune involved as well. 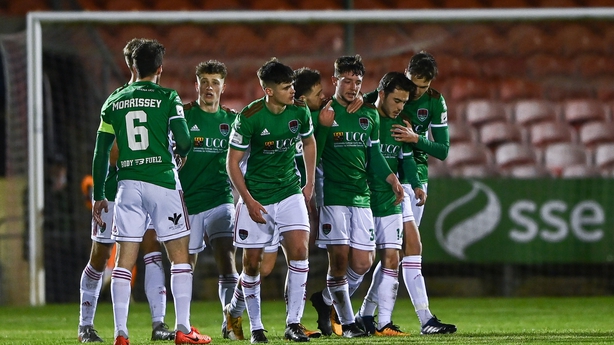 Dylan McGlade’s short corner picked out the run of Bargary and after his scuffed shot rolled perfectly into the path of the on-running Coleman, the centre-back calmly slotted the ball into the back of the net in front of an empty Shed End.

And they almost made it 2-0 shortly before the half-time break. It was Coleman who nearly added to his tally but his header from a Cian Murphy cross following an overhit McGlade corner was hacked off the line by the alert Cobh defence.

As the rain poured down at the beginning of the second half, the goalscoring opportunities dried up, although former City defender and current Rams captain John Kavanagh did almost catch McNulty out with an ambitious free-kick from the wing, but the shot-stopper reacted well to turn it over.

However, Stuart Ashton’s men would snatch an equaliser in the 66th minute as debutant Griffin latched onto Conor Drinan’s knock-on before drilling the ball under the legs of the retreating City number one.

The scores would be level for only 10 minutes though as City regained the lead thanks to Bargary, who fired home from close range following good work down the left by McGlade.

Cobh continued to battle and they were desperately unlucky not to make it 2-2 shortly after falling behind but Conor Drinan’s deflected strike hit the underside of the bar, bounced on the line before being scrambled to safety.

That proved to be as close as they would come to levelling terms as City hung on to secure the three points and the bragging rights in Cork.

Elsewhere in the division, Cabinteely were 2-1 winners over Wexford FC at Ferrycarrig Park, while Athlone Town snatched a late 2-2 draw against UCD at Belfield and 10-man Shelbourne left Eamonn Deacy Park with a point after a stalemate against Galway United.