Finn Harps made it two wins from two at the start of the SSE Airtricity League Premier Division season with a shock win over Dundalk at Oriel Park.

The Donegal side hadn't beaten the Lilywhites in any competition since a 2-0 win in a play-off in November 2007 and you had to go back to May 2006 for their last win at the Louth venue. However, they ended that hoodoo in some style as Adam Foley’s double sent them three points clear at the top of the table.

Foley was his side’s hero on the opening weekend with the winner against Bohemians at Finn Park. That goal came from a mistake by the visitors and it was a similar story for his opener here as Dundalk’s new Albanian keeper Alessio Abibi was caught in possession, allowing him to charge down the clearance to give his side a 42nd minute lead.

Patrick Hoban did head Dundalk level three minutes after the restart but Foley became the first Harps player to score twice against Dundalk since Jonathan Speak in September 1996 when he raced clear to slot a superb second past Abibi just after the hour mark.

While the result is fantastic for Ollie Horgan's side, it piles added pressure on a Dundalk team who were already in the spotlight before a ball was kicked over their management setup with Shane Keegan given the title of team manager and Filippo Giovagnoli being 'demoted’ to coach.

The Lilywhites are traditional slow starters but a single point from two outings to date is their worst return in 10 seasons and adds to the pressure as they prepare to face reigning league champions Shamrock Rovers in Tallaght next Friday.

After Will Seymore had fired over an early effort for the visitors, the Louth men began to grow into the game with Dave Webster coming to his side's rescue with a fine block to deny Junior on 12 minutes.

Hoban then curled an effort wide moments later but that initial bright spell failed to produce any other chances of note as Harps began to grow into the game with their high press troubling a rearguard which never looked comfortable. 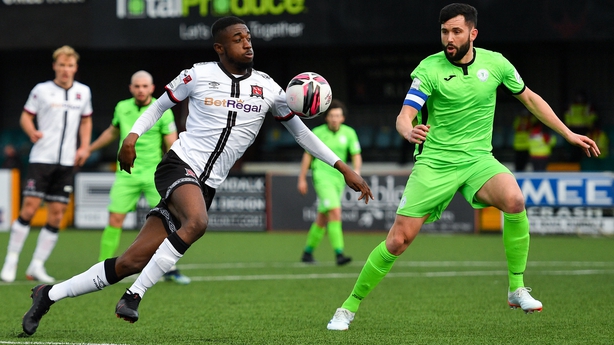 The warning signs of what lay ahead came on 26 minutes when Daniel Cleary was caught in possession by Barry McNamee, who presented Foley with a chance that Abibi did well to prevent by diving at his feet to claw the ball away.

Mark Russell then tested the keeper from wide on the right before Junior headed over from a corner from Duffy in a rare chance at the other end.

Disaster then struck for Dundalk two minutes before the break when Abibi took a heavy touch from Andy Boyle’s backpass with Foley charging it down as the rebound trickled to the net.

After a couple of changes at the break, Dundalk had to wait less than three minutes for a response. Local 17-year-old Ryan O’Kane won a free kick with Dundalk scoring an almost identical goal to the one they conceded away to Sligo Rovers six days earlier. Duffy’s ball in from deep was met by virtually a free header from Hoban who nodded past birthday boy Mark McGinley to make it 1-1.

The former Donegal GAA goalkeeper would keep the scoreline that way with a fantastic save at point blank range to deny Hoban on 58 minutes after he had been picked out by Cameron Dummigan’s cross.

Karl O’Sullivan fired over soon after that at the other end before Foley went agonisingly close to restoring his side’s lead on 63 minutes when he fired into the side-netting after cutting in from the right.

Finn Harps made it two wins from two at the start of the SSE Airtricity League Premier Division season with a shock win over Dundalk. Here's how they did it. #rtesoccer pic.twitter.com/GTaGB0ERGR

Within a minute he would be celebrating his second however as he was played in behind by McNamee before slotting past Abibi with relative ease as Dundalk’s pleas for an offside flag fell on deaf ears.

It almost got worse for Dundalk on 71 minutes as O’Sullivan outpaced Darragh Leahy down the right but his effort from a tight angle was easy for Abibi to deal with.

Dundalk pushed for an equaliser in the closing stages but Hoban’s bicycle kick attempt with three minutes to go came back off the butt of the post.

Jesus Perez did manage to fire through a crowd of bodies deep in stoppage time but McGinley was equal to it as Harps held out for a huge victory.