Spain struggled to create clear-cut chances as they were held to a frustrating 1-1 draw by Greece in a disappointing start to their World Cup qualifying campaign.

The hosts had 78% of possession throughout the Group B match, but rarely tested Odisseas Vlachodimos in the Greek goal, with their final ball uncharacteristically wayward.

The 2010 World Cup winners opened the scoring after 32 minutes. Alvaro Morata latched on to a lofted Koke through ball to fire in from close range and put them firmly in charge of the game.

However, shortly before the hour mark, substitute Inigo Martinez - on for captain Sergio Ramos - was penalised for a rash tackle on Greek midfielder Giorgos Masouras inside the box.

Anastasios Bakasetas smashed the ball in from the spot to level the scores and stun Luis Enrique's side.

Robert Lewandowski struck a thunderous 83rd-minute equaliser as Poland fought back to earn a 3-3 draw with Hungary in a pulsating World Cup Group I qualifier at the Puskas Arena.

Hungary grabbed a sixth-minute lead when Roland Sallai latched on to Attila Fiola's through ball, raced down the right and fired a low shot inside Wojciech Szczesny's near post. The home side doubled their advantage in the 53rd minute when Adam Szalai slotted home from inside the box.

Krzysztof Piatek and Kamil Jozwiak scored twice in the space of a minute for Poland before Hungary regrouped, restoring their lead when Szalai crossed from the left and defender Willi Orban turned the ball in at the back post.

But Poland's danger man, Bayern Munich forward Lewandowski, earned his side a point with a rasping drive when he was found inside the box by Bartosz Bereszynski and hammered the ball past Gulacsi into the top corner. 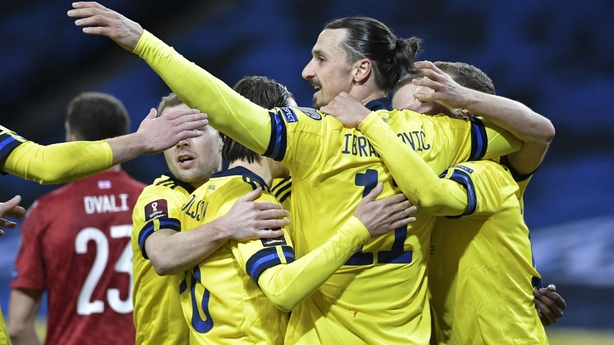 Zlatan Ibrahimovic created the only goal for Viktor Claesson as Sweden beat Georgia 1-0 on his return to international football.

Sweden went ahead 10 minutes before the break when Ibra, playing his first game for the national side since Euro 2016, chested down a ball into the box and volleyed it back at a tight angle for Claesson to take a touch and bundle home.

With the Swedes often careless in possession, Georgia fashioned a few decent chances and the best of them fell to substitute Levan Shengelia in the 82nd minute, but Kristoffer Nordfeldt made a superb save to keep his clean sheet intact.

Germany made light work of their start to the campaign after goals from Leon Goretzka, Kai Havertz and Ilkay Gundogan gave them a 3-0 home win over Iceland.

Goretzka and Havertz fired the Germans into a 2-0 lead inside the opening seven minutes before Gundogan sealed victory with a sizzling low shot from 25 metres in the 56th.

Florin Tanase and Valentin Mihaila had put Romania into a commanding 2-0 lead, only for Arijan Ademi and Aleksandar Trajkovski dragged the visitors back into the contest in the closing stages.

Ermir Lenjani struck to hand Albania a 1-0 victory in Andorra, while Noah Frommelt's own goal handed Armenia a 1-0 win on the road over Liechtenstein.

The Faroe Islands battled to a 1-1 draw in Moldova thanks to Meinhard Olsen's late effort, after Ion Nicolaescu's early strike had seen the hosts lead for the majority of the contest.

Breel Embolo, Haris Seferovic and Steven Zuber had the visitors in complete control just 12 minutes into the contest.

Kiril Despodov clawed one back for Bulgaria straight after half-time, but the Swiss still coasted to victory.

Martin Braithwaite and Jonas Wind struck either side of half-time to hand Denmark a 2-0 win over Israel.