The RTÉ2 cameras travel to Waterford as former Republic of Ireland international Kevin Sheedy oversees his first game in charge of Waterford.

Sheedy has put together a new-look squad made up loan acquisitions, youth and the experience of the likes of Brian and Daryl Murphy.

A late own goal by Cameron Evans meant a defeat for the Blues in their first game against Drogheda. They will look to bounce back here.

Sligo made a promising start last week, with the returning Romeo Parkes on target in a 1-1 draw against Dundalk.

All eyes will be on 17-year-old Johnny Kenny who was one of the best performers for Sligo when making his first senior appearance last week.

Karl Sheppard described Kenny as "the most dangerous man on the pitch" for the final quarter of the game against the Lilywhites, when speaking on this week's RTÉ Soccer Podcast.

Sligo Rovers: The Bit O' Red have no absentees for the game.

Liam Buckley (Sligo Rovers boss):  "It was nice to get a reasonable performance to begin with last week. We had good parts of our game and also areas to work on.

"This week provided time for some players to get shaper. We had a few lads who had a shortened pre-season due to quarantining or little niggles they picked up meaning they missed out on parts. They are getting stronger now. We've got everybody fit for Friday so we’ll pick the team we feel is right.

Waterford conceded an own goal in the closing stages against Drogheda, which was quite unfortunate, so we know that even after one game they are a difficult prospect.

"Every match we play is going to a hard one. We've spent some time working on our fitness and tactics and trying to improve on last week. We go to Waterford looking for the result." 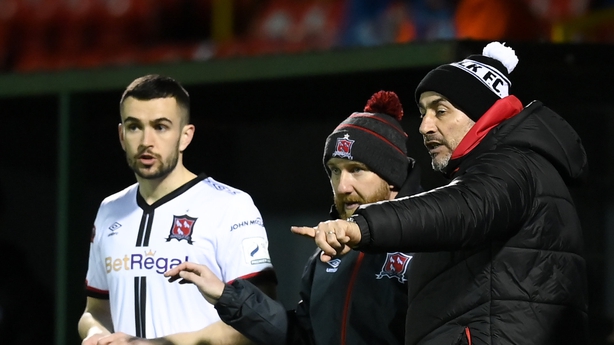 The Lilywhites did not back up the promise of their President's Cup display against Shamrock Rovers and looked like a side needing more time to gel following a host of transfer activity in the off-season.

Shane Keegan admitted there was some relief to leave the Showgrounds with a point. This week the Lilywhites are without some international stars.

Finn Harps caused a major surprise on the opening weekend by seeing off Bohemians in Ballybofey. Avoiding defeat here would make it a fantastic start for Harps.

Dundalk: Daniel Kelly, Sean Murray, Ole Erik Midtskogen and Val Adedokun are out but Brian Gartland is pushing to be in contention. Raivis Jurkovskis and Sonni Nattestad are on international duty while new signing Han Jeongwoo is hoping to be involved after training with the squad on Thursday.

Finn Harps: There's doubts over Karl O'Sullivan, Conor Barry and Ryan Connolly who were all forced off last weekend having picked up knocks.

Shane Keegan (Dundalk): "Harps will come here on a high after a brilliant win over Bohemians on the opening weekend of the season. On one hand, the result was surprising because you would expect Bohemians to be challenging for the top three but, on the other, it wasn't that big of a shock because everyone hates playing them in Ballybofey and, from a continuity point of view, they have had the least amount of turnover to their starting 11.

"From our own point of view, it’s our first home game of the campaign and we definitely need to make Oriel Park a fortress. I know it’d be a lot easier to do that with the place packed but it’s the same situation for everybody. We have to get back to making it a place where teams just dread coming to."

Ollie Horgan (Finn Harps): "It'll be tough no question. They have a lot of quality in their side and we’ve certainly struggled at Oriel Park in the past. Our win over Bohemians last weekend came at a price as we’re down a lot of bodies heading into this game. We’ll give it our best and hopefully come away with something."