Celtic captain Scott Brown has announced that he is leaving the club at the end of the season and will join Aberdeen in a player-coach role this summer.

The 35-year-old has agreed a pre-contract deal with the Dons and his impending departure adds to the sense of transition, with the club looking for a replacement for Neil Lennon – some bookmakers have suspended betting on the new manager market following a flurry of gambles on Roy Keane.

Newly-appointed Aberdeen boss Stephen Glass, who played with Brown at Hibernian, said: "The opportunity to bring a player of Scott's calibre, a leader who has more European appearances for Celtic than any other player, is a huge coup for me and for Aberdeen."

In 14 years at Celtic Park, the former Scotland international has won 10 Scottish Premiership titles and six cups, including a record-equalling nine league titles in a row and an unprecedented quadruple treble between 2016-17 and 2019-20.

"It was a privilege to sign for this great club all those years ago and it has been an absolute honour to play for and captain Celtic for so many years," Brown told celticfc.com.

"I would like to sincerely thank Peter (Lawwell), Dermot (Desmond) and the Celtic Board for their tremendous support over so many years.  We have always enjoyed a great relationship and always worked closely together to bring our fans as much success as possible.

"I would also like to thank the great Celtic managers I have had the good fortune to work with and also so many team-mates and, of course, the Celtic fans who have given me such phenomenal support and backing over the years.

"I have always given my best to the club and always wanted the best for our fans.  We have enjoyed some fantastic moments and success together, dominating the game in Scotland so regularly and enjoying some great European nights.

"It is a huge decision to leave this magnificent club, which has been such a massive part of my life for so long, but this is a new opportunity for me and a new chapter. Celtic will never leave me and the club will forever be in my heart.

"We still have work to do this season and that will of course, as ever be my full focus as we try to bring our fans more success." 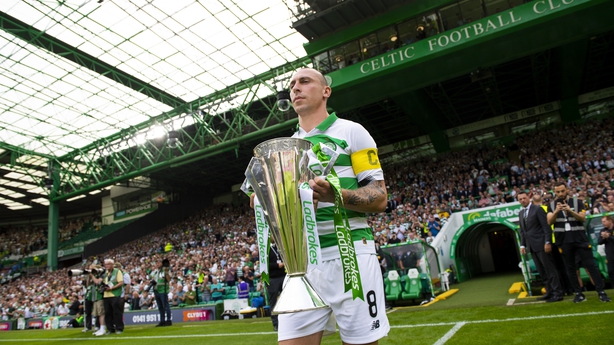 Brown and Celtic missed out on a record-breaking 10th league title in a row this season, with Old Firm rivals Rangers winning their first title since 2011.

Celtic tried "desperately" to keep Brown at the club beyond the end of the season, outgoing chief executive Lawwell has declared.

Brown is following the retiring Lawwell out of Celtic Park this summer after playing for the club for 14 years, more than 11 of them as skipper.

Lawwell said on the club’s website: "Scott Brown has been the heartbeat of Celtic for so long and without doubt, the most influential figure in the Scottish game across the past 15 years.

"With more than 600 appearances for the club, he has made an imprint on Celtic which puts him in the company of our other true greats – and with a legacy to match.

"Ever since signing, he has lived and breathed the club and our cause – day after day, across a decade-and-a-half, giving his heart and soul to Celtic.

"As every Celtic manager in the past 15 years will testify, as well as being a hugely talented player, Scott’s effort, his drive, his work ethic and his will to win, are an example to us all.

"He has been a pivotal figure in delivering such a sustained period of dominance for the club and for that, I know every Celtic supporter will be so grateful to him.

"Scott has had hugely difficult times in his life away from the pitch and his resilience and determination to face any challenge has been quite extraordinary.

"He is a tremendous man, someone of real quality and integrity and someone who I personally have been honoured to have at my side as Celtic captain.

"It goes without saying that we were desperately trying to keep Scott at the club, but while of course we are very saddened by his decision, we understand and respect it fully and wish Scott and his family nothing but success, health and happiness for the future."