Juventus' stranglehold on the Scudetto loosened even further after a 1-0 defeat at home to struggling Benevento left the Bianconeri 10 points adrift of Serie A leaders Inter Milan.

The Turin giants were looking to make up ground on their rivals but fell behind in the 69th minute when Arthur’s cross-field pass across his own area was cut out by Adolfo Gaich, who coolly slotted beyond Wojciech Szczesny.

Cristiano Ronaldo had earlier volleyed into the net but it was ruled out for offside while the Portuguese was thwarted on more than one occasion by visiting goalkeeper Lorenzo Montipo as Benevento held on for a famous win.

Atalanta moved level on points with Juve after a 2-0 victory at Hellas Verona, who crashed to a third successive defeat following first-half goals from Ruslan Malinovskyi, from the penalty spot, and Duvan Zapata.

Atalanta have played a game more than the defending champions but this was a satisfying domestic return following their elimination in the Champions League earlier in the week at the hands of Real Madrid.

AC Milan came from a goal down as they consolidated second spot in the table, winning 3-2 at Fiorentina as they bounced back from their Europa League elimination by Manchester United.

Zlatan Ibrahimovic put Milan ahead early on and although they fell behind after goals either side of half-time from Erick Pulgar and Franck Ribery, Brahim Diaz and Hakan Calhanoglu struck to give the visitors the points.

Fifth-placed Napoli opened up a three-point lead over sixth-spotted Roma after a 2-0 triumph at the Stadio Olimpico, with Dries Mertens scoring both of the Partenopei's goals in the first half.

Torino remain just a point above the bottom three after a 1-0 loss at Sampdoria, where Antonio Candreva scored the only goal of the game, while Adam Marusic’s effort helped Lazio win at Udinese by the same scoreline. 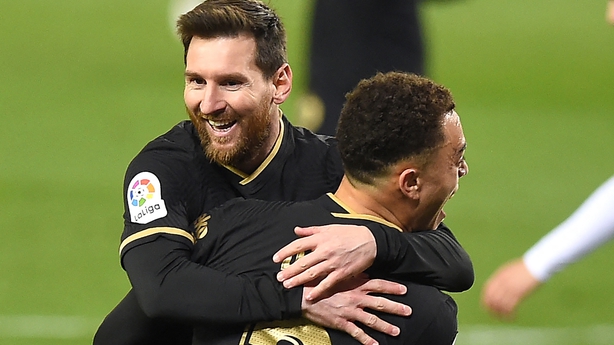 Lionel Messi bagged a brace on his record-breaking 768th appearance for Barcelona, who cruised to a 6-1 victory at Real Sociedad to remain four points adrift of LaLiga leaders Atletico Madrid.

Luis Suarez's 54th-minute goal helped Atletico stay ahead of the chasing pack by beating Alaves 1-0, but Barcelona leapfrogged Real Madrid and back up to a second after a night where Messi broke Xavi’s appearance record for the Catalan giants.

Sergino Dest emulated Messi in scoring twice, while there were also goals for Antoine Griezmann and Ousmane Dembele, with Ander Barrenetxea pulling one back when fifth-placed Sociedad were already trailing 5-0.

Gerard Moreno slotted home from the spot while Carlos Bacca struck as Villarreal won 2-1 against Cadiz, who pulled one back through Alex Fernandez. Villarreal therefore moved to within two points of the top-five.

Daniel Wass and Alex Blanco scored to help Valencia edge out Granada 2-1, with the visitors getting a consolation thanks to former Los Che striker Roberto Soldado, while Elche moved two points clear of the drop zone after a 1-1 draw at Getafe, where Enes Unal cancelled out Pere Milla’s opener for the visitors. 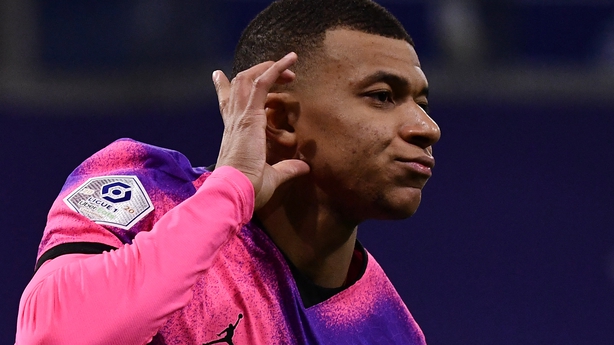 Paris St Germain took advantage of Lille’s surprise defeat to move to the top of Ligue 1 after withstanding a late Lyon fightback to prevail 4-2 at Groupama Stadium.

Kylian Mbappe bookended the scoring for PSG while Danilo Pereira and Angel Di Maria also found the back of the net as the visitors surged into a four-goal lead over their title rivals after 53 minutes.

Islam Slimani and Maxwel Cornet narrowed the deficit for third-placed Lyon but PSG held on to move above Lille on goal difference alone, with the sides both on 63 points.

Lille had earlier succumbed at home to Nimes, whose goals from Moussa Kone and Renaud Ripart either side of Xeka’s leveller gave the away side a priceless 2-1 victory in their battle to avoid relegation from the top-flight.

Salomon Sambia, Gaetan Laborde and Stephy Mavididi were all on target as Montpellier hit back from a goal down to beat Bordeaux, who had gone ahead thanks to Hwang Ui-jo but fell to a 3-1 loss.

Robert Glatzel and Dominik Kohr scored as Mainz moved out of the Bundesliga relegation zone with a 2-1 win at Hoffenheim, who had equalised through Ihlas Bebou.

Deyovaisio Zeefuik, Matheus Cunha and Jhon Cordoba all scored in the first half as Hertha Berlin thrashed Bayer Leverkusen 3-0, while Roland Sallai and Philipp Lienhart ushered Freiburg to a 2-0 success over Augsburg.