The Swede has missed Milan's last four games, including last week's 1-1 draw against United in the first leg, with a thigh injury.

Coach Stefano Pioli said the 39-year-old could play some part against United, a club where he scored 28 goals across all competitions between 2016 and 2018.

"Ibrahimovic and (Ismael) Bennacer are both available for selection," Pioli told a news conference.

"They are both coming back from long injuries and I am very pleased to have them back. We will see if they will feature tomorrow night. Ibra's return is important, he does not have 90 minutes in him maybe but we will see what choices to make.

"Ibra has given us a lot in terms of personality and depth. Zlatan is a great champion. I expect a lot from him from here to the end." 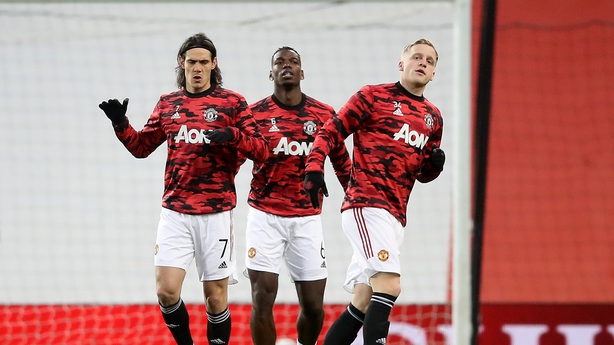 Paul Pogba, Donny Van De Beek and David De Gea are in contention to return for Manchester United, but Edinson Cavani and Anthony Martial will be absent.

Pogba, who has not featured since 6 February due to a thigh complaint, is in the travelling squad along with Van De Beek, while De Gea is back from paternity leave.

Cavani was named in the initial 21-man group, but Ole Gunnar Solskjaer has since confirmed he will not travel after having a negative reaction in training on Wednesday.

Martial is out of the last-16 second leg through injury, while Eric Bailly, Juan Mata and Phil Jones are also absent. Shola Shoretire has stayed at home in order to play for the under-23s.

Simon Kjaer's injury-time header at Old Trafford last week put Milan in a strong position but Pioli is aware United have not lost away from home in the Premier League all season, and are unbeaten in their last 13 matches in all competitions.

"I think there are a whole host of difficulties tomorrow night," Pioli added. "We are well aware of the ability that Man United possess and the (unbeaten) run they are on.

"The result of the first leg cannot affect our game. We have to be able to manage anything but always be dangerous in attack."

"We are happy to have Donny back, Paul and David," Solskjaer said. "Big players.

"Unfortunately, it looks like Edinson has got a bit of a reaction to training (on Wednesday) and didn't feel ready to travel.

"Eric is being assessed. I might be wrong there (in saying he was out). He might have turned around and said he's ready but he didn't train (on Wednesday morning)."

Van De Beek has struggled for game-time since joining United from Ajax in the summer and fresh reports emerged this week about his happiness.

Meanwhile United manager Ole Gunnar Solskjaer reasoned that winning a trophy does not necessarily mean that all is well at a club.

"We're 12 points ahead of what we were at the same time in the league last season. Of course we're all aiming to win trophies," he said.

"But, as we've said, sometimes a trophy can hide the other fact what's happening at the club.

"In the league position you see if you're progressing, really, and sometimes in the cup tournaments you might be lucky, you might be unlucky. Draws, games decided on different factors.

"It's the gradual progression and the consistency of being in the top of the league, in and around there, and then add the odd trophies.

"Sometimes a cup competition can hide the fact you're still struggling a little bit."