Diogo Jota marked his return to Wolves by reigniting Liverpool's fading Champions League hopes in a match overshadowed by a head injury to goalkeeper Rui Patricio.

Jota struck in first-half stoppage time to claim a hard-earned win at Molineux.

Yet the main talking point came late on when Wolves keeper Patricio was treated on the pitch for 14 minutes after team-mate Conor Coady accidentally caught him in the head.

Patricio was carried off on a stretcher wearing an oxygen mask in worrying scenes for Wolves, who are already missing striker Raul Jimenez after he fractured his skull in November. However, word from the home dressing room afterwards is that the goalkeeper was conscious, and sitting up.

Jota, who moved to Anfield in a deal worth £45million last summer, scored his first goal since November and first since recovering from a knee injury.

Victory lifted the champions to sixth in the Premier League table but still five points behind Chelsea in the race for the top four.

Wolves missed the chance to climb to 11th, with Ruben Neves and Coady wasting their best chances. 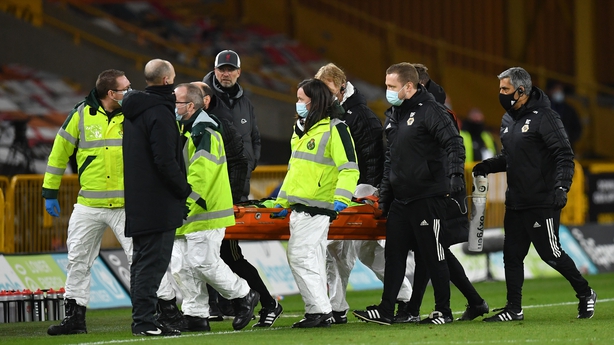 After six defeats in their last seven league games Liverpool were desperate for a win.

Their only victory in that wretched run had come at rock bottom Sheffield United and keeper Alisson Becker's uncertain form continued as he dropped Adama Traore’s cross before clattering into Nelson Semedo inside the opening two minutes.

He made a smart low stop to deny Semedo soon after, although Traore was offside in the build-up, before Liverpool swiftly went through the gears after 14 minutes.

Georginio Wijnaldum slipped Sadio Mane through but, when the forward rounded Patricio, he was pushed wide and the chance was gone.

It was the cue for the visitors to try to up the tempo, yet they were vulnerable on the break, with Traore twice breaking loose only to be let down by his final pass.

Liverpool were on top but could not find a way past Wolves as their play routinely broke down on the edge of the area, the Reds still missing the verve which swept them to last season’s title.

Wolves attacks were rare but Nathaniel Phillips needed to glance a header away as Willian Jose lurked at the far post with 32 minutes gone.

Liverpool had yet to hit their stride despite Mane planting a diving header wide from 12 yards seven minutes before the break.

It was symptomatic of an energetic half lacking in bite, while at the other end Alisson eventually made a save when he gathered Neves’ 30-yard free-kick.

Midfielder Neves then wasted Wolves’ best chance a minute before the break when he pulled a shot well wide after being found in the area by Jonny.

And the hosts paid the price in added time when Jota broke the deadlock.

The striker, who had previously been anonymous, caught Patricio out at his near post when he fired in low after a slick move involving Mohamed Salah and Mane.

Wolves, though, should have levelled just four minutes into the second half, but Coady headed over Romain Saiss’ cross.

The striker had a header comfortably saved by Alisson, while Patricio denied Salah as he searched for a killer second.

The striker then had a goal ruled out for offside with four minutes left before, as Patricio and Coady tried to stop him, the Wolves skipper caught his keeper in the head with his knee.

It was immediately apparent Patricio needed urgent assistance, with John Ruddy replacing him as a concussion substitute after a long delay.

Liverpool held on for a key win, but all thoughts were with Patricio.