Sunderland ended their 48-year Wembley hoodoo with a 1-0 victory over Tranmere in the Papa John's Trophy final.

Lynden Gooch's second-half goal ensured the Black Cats, winless in eight visits to Wembley since stunning Leeds to win the 1973 FA Cup final, were victorious in the capital.

There was little to separate the teams in an entertaining contest - but a moment of quality proved decisive in the 57th minute when Aiden McGeady split the Tranmere defence with a through-ball and United States international Gooch finished off the chance.

League Two beat League One in Saturday's 2020 final as Salford saw off Portsmouth - but there was no repeat the following day despite a spirited display from Keith Hill's team.

Tranmere had the best chance of the first half in the 15th minute when Grant Leadbitter's attempted clearance of Danny Lloyd's shot was well kept out by stretching Sunderland goalkeeper Lee Burge.

Chris Maguire, starting a game for the first time since December in the absence of the injured Aiden O'Brien, fired Sunderland's first attempt wide before Tranmere threatened again through Kieron Morris' blocked effort and Lloyd's header, straight at Burge. 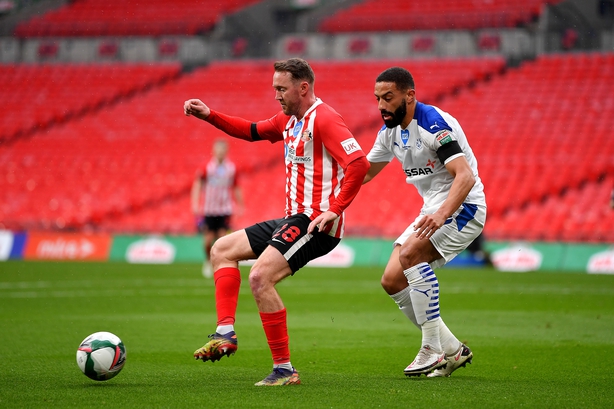 Maguire saw a 29th-minute shot deflected wide for a corner before an unmarked Max Power failed to make the most of a header at the far post.

Veteran Rovers defender Peter Clarke was penalised for a foul on Charlie Wyke in the 38th minute, giving McGeady a free-kick in a similar position to one he scored from in the 2019 final against Portsmouth - but this time the 34-year-old fired well over.

The Black Cats were forced into their first change in the 44th minute when central defender Tom Flanagan, who needed early treatment for a head injury, was replaced by Conor McLaughlin before Leadbitter produced a timely block to deny Lloyd.

Otis Khan nutmegged Luke O'Nien before drawing a diving save from Burge within three minutes of the restart, as Tranmere continued to look dangerous.

Then came the key moment, McGeady's vision and incisive pass setting up Gooch who advanced and coolly lifted the ball over goalkeeper Scott Davies.

The League Two side responded with a good spell of pressure, with O'Nien blocking a George Ray shot, Nugent narrowly failing to connect with a cross and Blackett-Taylor testing Burge.

However, Sunderland, who came close themselves when McLaughlin's 76th-minute effort was tipped onto the bar and over by Davies, held on to end their long wait for Wembley success.