Australia captain Kerr grabbed the Blues' opening two goals inside the 10 minutes - both assisted by Fran Kirby - before the England forward's brace put Chelsea 4-0 ahead at the break.

Kerr completed her treble in the 48th minute before Guro Reiten rounded off the win as Emma Hayes' side secured another trophy.

Kerr put the Blues on the scoresheet within the first two minutes of the game as the Australia captain tapped the ball over the line after meeting Kirby's low cross in front of goal.

Kerr got her brace in the 10th minute courtesy of a close-range strike, again assisted by Kirby. 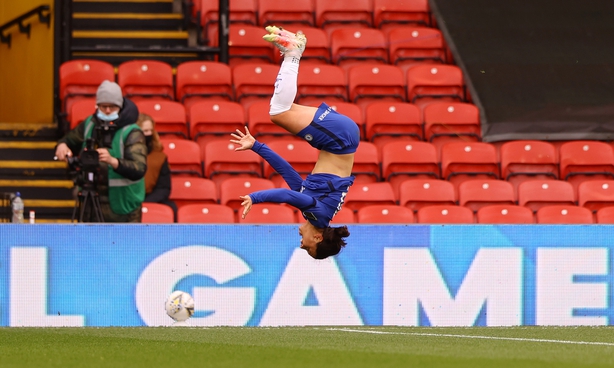 In the 28th minute, Kirby went from provider to goalscorer as she pounced on Sophie Baggaley's loose ball at the back. The England forward launched a looping ball from outside the box and over Baggaley, who was off her line.

Five minutes later, Kirby was once again on the scoresheet after going one-on-one with the keeper, making it 4-0 to Chelsea before half-time.

Kerr completed her hat-trick three minutes into the second half, scoring her second tap-in of the game. Once again assisted by Kirby.

Fifteen minutes before the final whistle, Chelsea defender Maren Mjelde went down after a challenge from Bristol's Aimee Palmer. The Norway captain was carried off the pitch on a stretcher, with gas and air administered by paramedics.

This is the first time since 2013 in which a team has won consecutive Continental Cup trophies and with more silverware to win this season, Chelsea are on the hunt for more success.