Ayoze Perez's strike and an Ethan Ampadu own goal sealed a 5-0 success for the Foxes which saw them return to second place in the table, ahead of Manchester United's game against West Ham later.

For the Blades, it rounded off a difficult week which had seen the departure of manager Chris Wilder the day before the match.

There has been few more remarkable or romantic stories in English football than the Sheffield lad and Blades supporter who dreamed longingly out at the hallowed Bramall Lane turf as a ballboy, who would then play for the club he loved and pack the kop with his friends and family, lead them from the stagnancy of the third tier to a top-half finish in the Premier League, and make a fanbase fall in love with their team once more.

It took Wilder just four years, but nine months on the club's injury crisis coupled with the financial realities of top-flight football for a recently-promoted team and - crucially - fundamental differences exposed between Wilder and the owner, the bubble burst.

Under-23s coach Paul Heckingbottom took charge on Sunday but it was the same old story for the Blades, as they struggled to make an impression or trouble Leicester as an attacking threat. The Foxes dominated and could have won by a bigger margin.

Jamie Vardy dragged a 20-yard shot wide after eight minutes before Perez's glancing header was touched on to the post by Aaron Ramsdale shortly afterwards. Ramsdale then blocked a low shot from Vardy with his legs.

Leicester made the breakthrough six minutes before half-time. Some sharp, incisive passing between Youri Tielemans and Perez resulted in Vardy getting in behind the Blades defence down the left-hand side. His low cross left Iheanacho with a simple tap-in from close range. 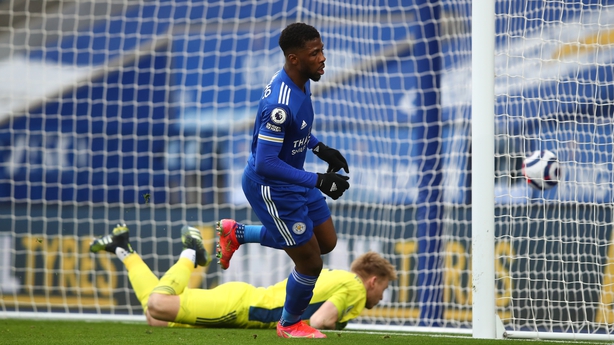 Five minutes into the second half, Iheanacho tried to return the favour for Vardy but he saw his effort brilliantly headed off the line by Chris Basham.

Iheanacho then put Vardy through on goal after an hour but once again Ramsdale denied the diminutive striker with his legs.

A second goal was coming and Leicester doubled their lead after 64 minutes. Marc Albrighton led a counter-attack after the Blades had a free-kick in a dangerous position, and teed-up Perez who found the bottom corner with a strike from the edge of the penalty area.

Five minutes later, it was 3-0 to the Foxes. Vardy was the provider for Iheanacho once more, with the striker guiding the ball past goalkeeper Ramsdale from 12 yards.

Iheanacho completed his hat-trick after 78 minutes, driving a low shot from 25 yards beyond Ramsdale and into the bottom corner of the net.

It was the Nigerian striker's first Premier League treble, and he looked quite emotional as the game restarted.It got worse for the Blades two minutes later when Vardy's shot from the left side of the penalty area, which looked to be heading wide, ended up in the back of the net via the outstretched leg of Ampadu.

It should have been six, and another goal for Iheanacho, but his shot was deflected over the crossbar by George Baldock.