Chelsea extended their unbeaten Premier League run to 10 matches in an entertaining goalless draw at Leeds.

The Blues, who have not lost in 12 games in all competitions under manager Thomas Tuchel, were given a thorough workout by Leeds, who fully deserved their point.

Both sides struck the crossbar in a frenetic first half and both goalkeepers were forced into decisive saves.

It was also another clean sheet for Tuchel's side, who have conceded only two goals since he replaced Frank Lampard in January.

Leeds drew their first match since November - 0-0 against Arsenal at Elland Road - and fell one game short of setting a new club record of 19 successive league fixtures without a draw.

With both sides intent on a razor-sharp press, it made for a helter-skelter opening 20 minutes.

Leeds had an early Tyler Roberts effort chalked off for offside and both goalkeepers had their respective crossbars rattled.

Chelsea were almost gifted a comical opening goal when Luke Ayling's clearance rebounded off team-mate Diego Llorente and came back off the woodwork in the 10th minute.

Roberts then combined with Patrick Bamford following a swift Leeds counter-attack and the former's neat chip was brilliantly tipped on to the bar by Chelsea goalkeeper Edouard Mendy. 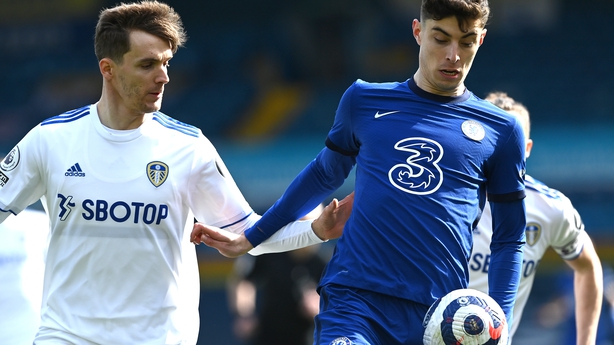 Leeds were dealt a blow 10 minutes before half-time when Bamford limped out of the action and was replaced by Rodrigo.

Clear-cut chances were limited and the first period ended goalless, but the pace of the game remained unrelenting.

Leeds goalkeeper Illan Meslier saved well from Christian Pulisic soon after the restart as Chelsea probed and applied the pressure.

Ayling did enough to deny Kai Havertz a clean header and N'Golo Kante made a mess of his effort inside the area.

But Leeds held firm and after swarming forward themselves went close to taking the lead when Mendy flung out a hand to keep out Raphinha's shot on the turn.

Chelsea left-back Ben Chilwell failed to keep his shot on target after charging into the area and at the other end Pulisic blocked Raphinha's effort. 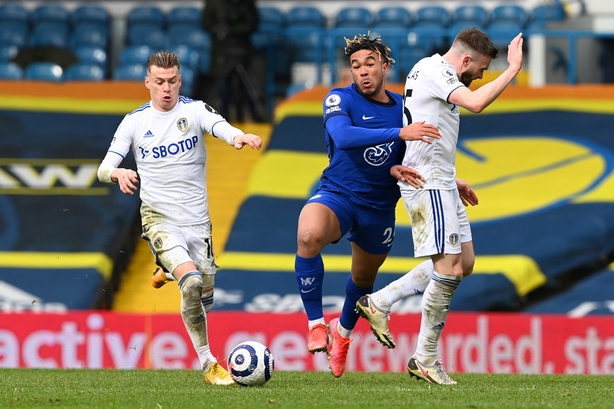 Each time Chelsea tried to shift into a higher gear, Leeds responded. Llorente's goalbound shot was deflected off target by James and the Spain defender's header was saved following another corner.

Substitute Callum Hudson-Odoi's angled drive, after nifty footwork in the area, was the last effort on target and comfortably gathered by Meslier.