Jose Mourinho expects Harry Kane to be fit for Sunday's north London derby against Arsenal after he picked up a knock in Tottenham's 2-0 Europa League win over Dinamo Zagreb.

The England captain continued his sensational season with both goals in the last-16 first-leg win against the Croatian side, but was taken off in the final 10 minutes and was later seen on the touchline with ice on his knee.

He looked to be moving better at the full-time whistle and Mourinho says it would take something special to keep Kane out of a game he loves playing in.

Asked whether he will be fit for Sunday, Mourinho said: "I hope so, I believe so. It is a big match, only big problems stop him to be there. Let’s see the reaction tomorrow but I am sure he will be fine."

It was another impressive display from Kane, who took his tally to 26 goals for the campaign, having also added 16 assists and the Dinamo Zagreb coach Zoran Mamic called him a "master of football".

Mourinho agreed with that assessment: "He is. He is very intelligent. His football is an intelligent football.

"Some strikers score lots of goals and that is the most important thing in football for a striker, which he does, but apart from that he understands every tip we give him, in terms of his positioning, movement, he understands the game very well.

"He feels the spaces, he looks around to see where other players are and he can affect the game. He is really a very good player." 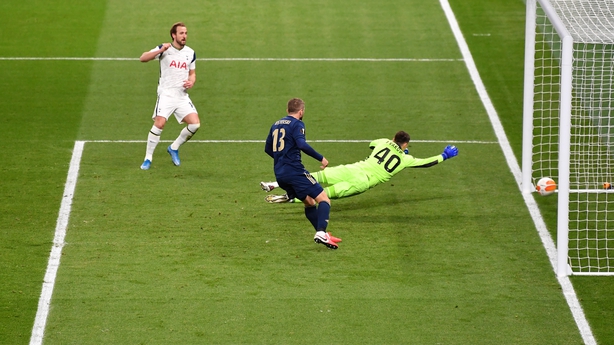 Kane was the difference for Spurs in a match they dominated but struggled to create a raft of chances against a compact team, who arrived in north London on the back of eight successive wins.

He opened the scoring in the 25th minute when he converted a rebound from Erik Lamela's shot which hit the post and then punished some poor defending with a clinical finish with 20 minutes remaining to put Spurs in control.

Mourinho was happy with the performance, but says their work is not yet done ahead of the second leg in Zagreb next week.

"It was not a bad performance at all," he said. "I think it was positive. Maybe we could play with a little bit more intensity. Because we had let’s say a fresh team, apart from 3-4 guys, lots of the players were totally fresh, but it’s not also easy to play against a physical team and a team that defends well like they did.

"They defended well. When the result was 1-0 in the second half they tried to keep that result so they still stayed in a low block and defended well.

"So it’s not easy. The result could be a little bit bigger. A third goal would have come and fit very well in the reality of the game, but it is what it is.

"It’s still open. We have to go there and play a serious match because 2-0 we are not yet in the quarter-finals."

Mamic said his side have not given up hope of a comeback.

"Kane showed us again what a master of football he is," he said. "The second goal, the way he calmed the situation and then his shot was impossible to defend.

"There I always hope in football, anything is possible, we must believe. You enter every game to win and you cannot start a game thinking we are definitely going to lose. I think we are going to have more chances in Zagreb."