New rules and the promotion of Under-19 players will ensure that Covid-19 does not result in the postponement of games in the 2021 SSE Airtricity League season.

We're just over a week out from a campaign where are full set of fixtures have been pencilled in for the Premier and First Divisions, as well as the Women's National League.

Speaking at the launch of the new season, SSE Airtricity League director, Mark Scanlon was asked about what sanctions might be in place if clubs are unable to fulfil fixtures because of the pandemic.

The latter did see the postponement of a few games towards the back end of what was a truncated season in 2020.

"The off-season has given us an opportunity to review the incidents that happened last year and to look at best practice across Europe and to see what we can do," Scanlon stated with regard to what plans are currently in place.

"By and large last year went very well with regard to Covid-19 situations within the ground. Covid-19 officers, event controllers and club staff were very diligent in what they done. The situation where we had 100 or 200 back in stadiums for a limited time was managed really well.

"We're very confident that when we get the opportunity to go back our clubs will be in a position to roll that out again. Contingency plans are ready to go with regard to seating arrangements, whether that's one metre or two metres, to have a limited number of people in stands. Clubs are ready to go on that.

"We've have also been engaged with the GAA and IRFU re the 'Safe Return to Stadium Plan' that has been submitted to government through the export medical group and Sport Ireland. We are keen to see fans back in stadiums as soon as possible and are happy to work with government and Sport Ireland on that." 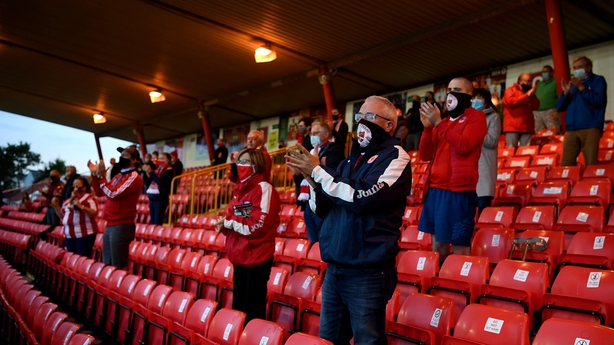 And now on the cusp of the new season, specific regulations have been introduced so that fixtures can proceed as scheduled.

"We've introduced a set of rules around postponement this year and clubs have been fully informed on that, and involved in the process.

"The rules have been signed off by National League Executive Committee. There will not be postponements this year. We have introduced increased protocols which will hopefully prevent close contacts so we won't have a situations where players will be stood down.

"We have improved out registration process to allow clubs register U-19 players with first teams and so have a wider base to pick from. As long as a club has 14 fit and available players a fixture will proceed. If they don't we'll have a situation where the game will be conceded.

"It's part of the specific regulations introduced into the league this year. This year we are all starting from a clean sheet. We can't into a season with indefinite postponements and not know when are fixtures are going to be played."