David Moyes sent a warning to Manchester United and Arsenal as West Ham continue their unlikely bid for a Champions League spot.

The Hammers boss admitted his high-flying side were not at their best as they beat Leeds 2-0 on Monday night to move up to fifth.

West Ham head to Old Trafford on Sunday and play their game in hand at home to Arsenal the following weekend.

Moyes said: "The biggest step is that the players are really disappointed with how they played against Leeds so that shows you the standards we have set most of the season.

"But it's a good sign that they are all on board with that and recognised it.

"We are in a good position and we are really pleased we are up challenging the top boys. If you had given me Sheffield United at home, Tottenham at home, Leeds United at home and said 'you'll win the three games' I would have said 'what a really good return that is'.

"I had an idea of how many points we can take from them and we have just won two games. I know we lost at Manchester City the other week but out of those three we have won two which is a great return.

"We have now got Manchester United and Arsenal in that group of five games which I have been looking at and if we can get another win it would be a good return from this group of games." 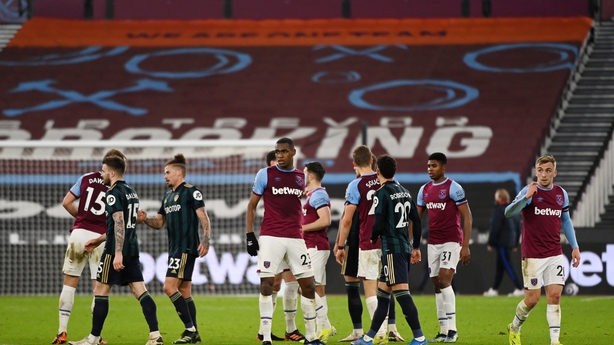 Jesse Lingard, who will miss the United game under the terms of his loan deal, opened the scoring against Leeds by converting the rebound after Illan Meslier saved his penalty.

Craig Dawson headed the second to condemn Leeds to a fourth defeat in five matches.

Boss Marcelo Bielsa took responsibility for the goals his side are conceding.

"The answer I give you opens up another type of analysis because having had defenders who have played so well, you start to think why have we conceded so many," he said.

"In this case, I think there's a responsibility from myself because if you have good footballers to recover the ball and the team concedes goals, inadvertently the coach is involved."