Jack Byrne has given a glowing appraisal of new Republic of Ireland assistant coach Anthony Barry.

Barry replaces Damien Duff in Stephen Kenny's back-room team, with the Liverpudlian set to combine his Ireland role with his current position as first-team coach at Chelsea.

Still just 34, Barry is highly regarded at the top end of the game.

Byrne crossed paths with him at Wigan Athletic back in 2017 when Barry came in to work under ex-Sligo Rovers boss Paul Cook.

The Dubliner, currently at Cypriot outfit APOEL Nicosia, only spent a year at the Latics before moving to Oldham but he got a glimpse of Barry's methods on the training pitch and was impressed with what he saw.

"He's sound, 100%, a lovely fellah," said Byrne, who was speaking at the launch of the SPAR FAI School Zone.

"He was very good to me when I was there. He’s a really good coach.

"I’m over here with Joe Garner. Joe had him for a full season when he was at Wigan under Paul Cook. He said he was absolutely brilliant.

"He’s obviously impressed a lot of people. We’re getting a really, really good coach to replace another good coach, Damien, who all the lads will say was great around the place." 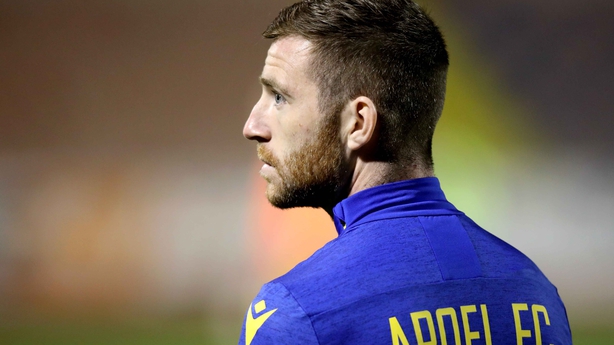 Byrne is currently sidelined as he recovers from a back operation to treat a disc herniation.

Last January, just hours after Byrne had made his APOEL debut, ex-Ireland boss Mick McCarthy was sacked. He'd been in charge for just nine games.

At the time it was seen as a potentially disastrous development for Byrne in terms of his future at the club but the midfielder is philosophical about the fallout and optimistic about his future.

"It was (a shock), but that's football. I was in talks with the club for a while before I came out here. I’d been speaking to the club and the president here and got really good vibes off them.

"Obviously Mick was a big factor in me coming here because he’s the man that gave me my international debut, but I knew coming out here that in football… you know it’s happened to me so many times before.

"When I was at Wigan, before I was even fit to play a game, the manager Warren Joyce got the sack. I’d signed a three and a half year contract there so these things happen in football.

"You’re probably never going to have the same manager for longer than two or three years most of the time. That’s just the nature of the game.

"It wasn’t a big issue when Mick was sacked because I knew the nature of the conversations I’d had with the club before I came out the length of the contact I’d signed - two and a half years - showed the club wanted me here."