Mick McCarthy marked the 1,000th game of his managerial career by extending his unbeaten start to life as Cardiff boss to 11 games with a goalless draw at Huddersfield in which Yaya Sanogo missed a second-half penalty.

But the result meant the Bluebirds missed out on an opportunity to climb into the Championship's play-off positions, as Huddersfield kept their first clean sheet in 16 matches.

The spot-kick blunder, however, means the Terriers have now failed to convert all three of the penalties they have been awarded this season.

A frantic first half-hour did not lack endeavour but quality was sparse from both teams.

With less than two minutes on the clock, home goalkeeper Ryan Schofield reacted quickly and stretched out a leg to block a six-yard chance for Cardiff skipper Sean Morrison after his team-mates had failed to clear Joel Bagan's left-wing delivery.

Alex Vallejo also got in the way of a Joe Ralls shot as the Terriers survived an early onslaught from McCarthy's men.

The Cardiff keeper went on to make a more elaborate save to keep out Juninho Bacuna's curling free-kick after the Curacao international had been dragged to the deck by Will Vaulks.

At the other end, a marginally-offside Vaulks' thumping volley rattled against the crossbar from six yards after the ball fell from the air following Harry Wilson's blocked shot.

Following Josh Murphy's long-range strike that was deflected away from goal by Naby Sarr, Schofield then had to display sharp reflexes when Vaulks smashed an edge-of-the-box volley on target after Fraizer Campbell had cleared Wilson's corner.

There was a distinct lack of goalmouth action during the early stages of the second half, with both sides continuing their struggle to gain a stranglehold on the game.

Huddersfield gradually began to threaten more, however, as Campbell tangled in the box with Curtis Nelson, but shouts for a home penalty were ignored by referee Tim Robinson.

Bacuna also curled a free-kick in from the left that Richard Keogh, leaning back and stretching, did well to direct narrowly off target with his head.

The building momentum told in the 74th minute when O'Brien exchanged passes with Sanogo and pulled the ball back for Aaron Rowe, who was felled by a lunging challenge from Nelson 10 yards from goal. 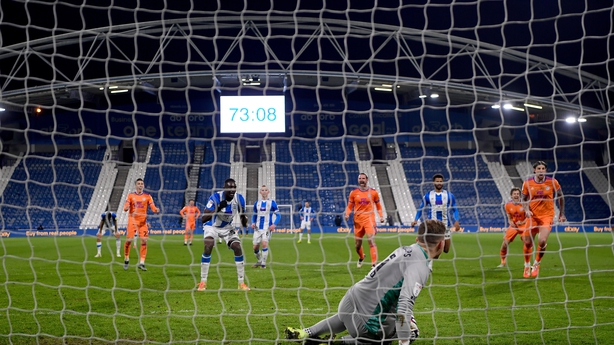 But the former Arsenal striker made a hash of the resulting penalty, firing wide of Phillips' right-hand post.
A frustrated Sanogo also skied over from 20 yards moments later before being replaced, while a deflected Jaden Brown shot brushed the side-netting with the visitors' first chance of the half in the 78th minute.

O'Brien, pulling the strings in the Terriers' midfield, released Pipa through the left channel for an opportunity that was well smothered by Phillips and then sent in a cross that was headed down by Sarr for an unmarked Campbell to be just as wasteful as Sanogo when he cleared the crossbar with a half-volley from seven yards.

Cardiff, who have not tasted defeat in any of their last 15 meetings with Huddersfield, might even have stolen victory in stoppage time, but Morrison's close-range overhead kick was collected by Schofield.