Barcelona made it to the final of the Copa Del Rey with an extra-time victory over Sevilla.

Losing 2-0 from the first leg, the Catalan giants forced an extra 30 minutes when Gerard Pique levelled the tie at 2-2 overall in the fourth minute of stoppage time.

Martin Braithwaite was the hero, heading home five minutes into the first period to secure a 3-0 win on the night and 3-2 aggregate victory.

Ousmane Dembele had given Barca the lead in the 12th minute, while Sevilla had been reduced to 10 men shortly before Pique's goal when Fernando was shown a second yellow card for a foul on Francisco Trincao.

Sevilla’s Luuk de Jong, who had been substituted in the 54th minute, was shown a red card from the bench at the death.

In Serie A, Napoli came from behind twice in an entertaining 3-3 draw at Sassuolo which included three penalties and an own goal.

Sassuolo took the lead in the 34th minute when Nikola Maksimovic put through his own net, only for Piotr Zielinski to level four minutes later.

Domenico Berardi’s first-half penalty was cancelled out by Giovanni di Lorenzo’s 72nd-minute goal for Napoli, who took the lead for the first time in the last minute from Lorenzo Insigne’s penalty, only for Francesco Caputo to score a spot-kick in the fifth minute of added time. 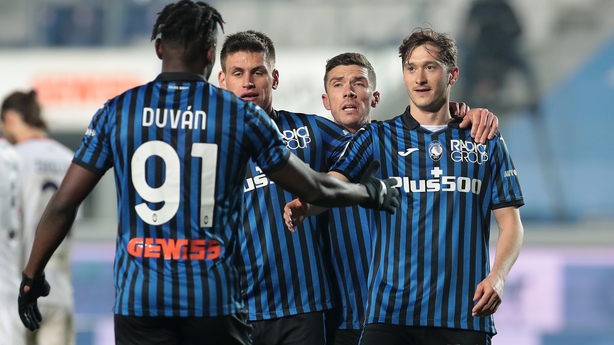 Atalanta had five different players on the scoresheet during a 5-1 thumping of bottom side Crotone.

Roma won 2-1 at Fiorentina, while second-placed AC Milan could only manage a 1-1 draw against Udinese.

Verona won 3-0 at Benevento, Cagliari secured a 1-0 win over Bologna and Genoa and Sampdoria played out a 1-1 draw.

Pablo Sarabia scored the only goal as Paris St Germain secured all three points in a narrow 1-0 victory at Bordeaux.

Third-placed Lyon kept the pressure on the top two with a narrow 1-0 win over Rennes.

Brest moved closer to the top half of the table with a 3-1 victory over rock-bottom Dijon, while Angers won 1-0 at Metz.

Nice ended a run of four consecutive losses in all competitions with a 2-1 home win over Nimes, while Lens won 3-2 at St Etienne.

Strasbourg secured all three points in a 1-0 win over Monaco, while Reims won 2-1 at Nantes and Montpellier drew 1-1 with Lorient.