Though Ireland's prospects of deriving any benefit from the fixture were considered slim, RTÉ took a chance and sent George Hamilton to Sofia to do live commentary on Bulgaria's match at home to Scotland on 11 November 1987.

Bulgaria hadn't lost a game at home in several years and, as the Irish players and management could attest to, referees had a rather pronounced tendency to deliver outrageous decisions in their favour in the Vasil Levski Stadium.

Nonetheless, there was a chance. In the previous round of international fixtures, Ireland had concluded their campaign with an impressive 2-0 home win over the Bulgarians while the Scots, who'd already ruled themselves out of contention with a poor start to the campaign, beat 1986 World Cup semi-finalists Belgium 2-0 in Hampden later that day. This was the only combination of results that could have kept Ireland's hopes alive that week.

The night before the Scots took the field in Eastern Europe, Ireland, now in a nice groove, smashed Israel 5-0 in a Dalymount Park friendly, establishing an eight-game winning streak in the process (still an ROI record), and Jack Charlton duly promised Andy Roxburgh the obligatory crate of champagne should the result in Sofia go the right way.

Hamilton set off for Bulgaria alongside producer Maurice Reidy.

"There was a positive feeling about it, that RTÉ had gone to the trouble of televising this match. 'But we probably won't get anything out of it', that was the attitude."

Where else to travel but on the Scottish team plane? The length of VIP rope separating professional footballers from the rest of humanity wasn't as closely policed in the 1980s. It was a more carefree era with journalists, broadcasters, team and management regularly travelling out on the same flight.

"Maurice and I went to Bulgaria with the Scotland team on the official flight. We were the Johnnies Come Lately so we were given row 32 right at the back of the plane - which was fair enough, because we were just bunking in on their plane.

"There was no question that we were very welcome guests in this circumstance. And there was this, for want of a better word, fraternity expressed. We were a curiosity but a nice one."

On the jubilant plane journey back, they were an even nicer curiosity. The Scots were chuffed for their own sake but almost as much for Ireland's. 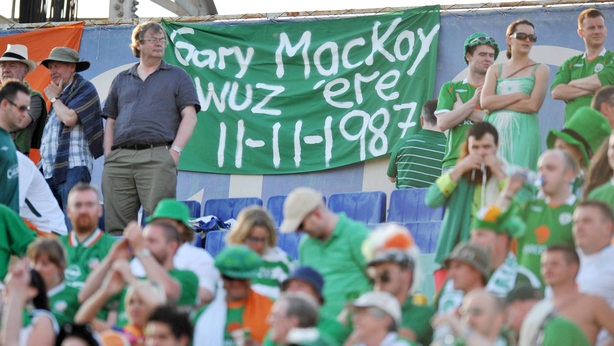 "Ian St John was a guy I kind of knew from my time at the BBC," says Hamilton, of the former Liverpool striker who died on Tuesday.

"Scotland had won and Ireland had qualified and there were two Irish blokes on the plane. This tickled him hugely and he came down the back to spend the flight with us, simply because we had something to celebrate.

"The Scottish FA had their own travel manager and this guy had a bottle of Scotch duty free. There was no drink on the plane because it had all been drunk on the way out and they kept the beers for the players. So, the rest of us had no means of getting a drink.

"I don't know whether St John prevailed upon the travel agent or the travel agent decided himself but he brought his bottle of duty free scotch down the back of the plane so that Reidy and myself could have a drink with Ian St John. We had a great flight back.

"I knew him in the way that you do when you're on the circuit that you bump into other ex-players who are working with other organisations and you get to know them because it's a small enough group of people who are doing this kind of travelling. I had met him in my BBC days so I kind of knew him. He was a gregarious kind of fella who would want to share in someone's happiness."

A central figure in Liverpool's original drive from Second Division irrelevance to First Division glory in the 1960s, St John was better known to later generations as one half of the Saint & Greavsie double act, the smooth straight man to Jimmy Greaves' cheeky Cockney.

He was the perfect foil for Jimmy Greaves, the Cockney wide-boy, and St John was the humorous Scot taking the mick

"Saint & Greavsie was the big programme at Saturday lunch-time," recalls Hamilton. "The BBC had Football Focus but Saint & Greavsie was more light-hearted. He was the perfect foil for Jimmy Greaves, the Cockney wide-boy, and St John was the humorous Scot taking the mick.

"He talked like he played. There's a photograph I saw today of Gordon Banks coming out to make a save from him, presumably in a Cup semi-final because it was at Sheffield Wednesday's ground. He put his head where others would fear to put their feet."

St John's time at the helm of ITV's football coverage coincided with Irish international football's time in the sun. He fronted the coverage on the day Ireland triumphed in Stuttgart, the day when Clough expressed his delight that Mick McCarthy was fit and the injured Liam Brady was quick to cite those remarks in his half-time assessment from the stadium.

The Saint & Greavsie era ended, fittingly enough, in 1992, with the pair in Stockholm at the end of the European Championship, singing 'The Last Time' and cycling away on a rickshaw.

The 'Whole New Ball Game' started that August but Jimmy Greaves and the late Ian St John remain treasured icons of the old one.