RTÉ Group Head of Sport Declan McBennett has defended the decision to cancel the League of Ireland highlights programme Soccer Republic, saying the broadcaster remains extremely committed to soccer with the continuation of the WATCHLOI streaming service.

A new broadcast deal between the FAI and RTÉ Sport will see over 50 Premier Division matches broadcast live between on RTÉ television and WATCHLOI up until the mid-season break in June.

But it has come at a cost, with the highlights programme not returning having first started as Monday Night Soccer over a decade ago.

It also means that from the summer onwards, as things stand, RTÉ Sport's television Irish club soccer coverage will only be occasional live games.

Speaking on the RTÉ Soccer podcast, he said dwindling viewing figures and resources led to the decision to cut Soccer Republic.

McBennett said: "A highlights programme with a small audience is no longer feasible from a League of Ireland perspective.

"It is essentially for two reasons. We know, and everything points to, since the advent of digital, there are two ways to consume sport. There is live which is the preferred option for 90% of the audience and then there is digital through social media which is immediate.

"In the last number of seasons one of the things the clubs wanted was instant access to their goals so they could make them available to supporters and fans immediately. RTÉ made that available and possible. Highlights never do as well and continue to decline in terms of people engaging, with two exceptions.

"They are Match of the Day which has a multi-million following in the UK and The Sunday Game which is a blue-chip product from an RTÉ perspective. In general the overwhelming evidence points to the fact people engage with sport live or digitally.

"We are absolutely adamant and categoric that the best use of those resources is the provision of live sport to people. We take the money available to us and help with the production of WATCHLOI. We did 81 games last year and will do close to 60 this season.

"The numbers engaging with Soccer Republic had been declining, as is the case of most highlights programmes, for a number of years.

"When you have to deal with scarce resources and reduced resources, you have decisions to make. RTÉ and I had a decision to make on which is the best way to engage with the fans and the best way to bring soccer to people.

"Certainly in a Covid environment, the best way to do it is bring live games. People have made a decision that live is the way they view and their decision influences our decision, not the other way around. If the highlights programmes were doing extremely well, we would continue with that. But it isn’t and we have to look at the best use of our resources. The fans undoubtedly across all sports want live and digital access." 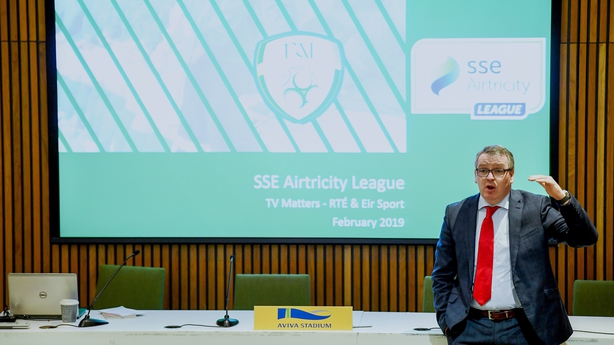 WATCHLOI subscriptions numbers did disappoint clubs and the FAI, but McBennett believes bringing live football to the public at a time when people cannot attend is the success of the product from an RTÉ perspective.

He said that the additional demands from viewers for improved production is not feasible in some areas due to costs.

"The success of WATCHLOI is defined in different ways, depending on where you are coming from. I’ve heard it repeatedly that RTÉ is not committed to the League of Ireland, that RTÉ is somehow undermining the league.

"I’m acutely aware of the shortcomings in terms of WATCHLOI. They’ve been articulated to me, I’ve had fans contact me directly. I’m also charged with spending public money and you can’t continue to spend public money for a very small audience.

RTÉ Sport has consistently been the dominant broadcaster for League of Ireland, with Eir Sport a secondary rights holder.

Currently, RTÉ are the only confirmed broadcaster for 2021.

When asked about the public perception of RTÉ when it comes to providing League of Ireland coverage, the RTÉ Sport chief said the "factual evidence" shows that there is support for the League of Ireland from RTÉ.

"The WATCHLOI service came from RTÉ. It came directly from me, with one other individual in RTÉ, two progressive individuals in Croke Park (for GAAGO use) and two in the FAI in Niall Quinn and Garry Owens.

"That is where WATCHLOI came from. RTÉ has consistently backed the League of Ireland.

"There are five broadcasters in the Republic of Ireland. Some of those broadcasters have never engaged with the League of Ireland, certainly in recent times. Others have engaged and diluted their commitment.

"RTÉ has never diluted its commitment to the League of Ireland. It has increased its commitment. We were contracted to do 65 games on WATCHLOI last season and did 81 games in the end. We are back again doing it again this season.

"Those people who say we are not committed or, as has been alleged to me on social media, that I was setting this up to fail, it bears no resemblance to the actual factual evidence. We provided a service, we continue to provide a service and we hope people engage with it."

McBennett was unwilling to divulge the exact spend by RTÉ on League of Ireland for commercial reasons, but did say it is a multiple six-figure sum every season through live games, the former highlights programmes and now WATCHLOI.

"There is a public service for RTÉ to bring games to people. We absolutely over and above filled that remit in Covid times. We will continue to do that.

"That is why we have made the commitment to the FAI and League of Ireland fans that we will do that up until the mid-summer break."